FF+, DA ready to join others to save Mangaung, but EFF not welcome

The parties said they were willing to form coalitions with those who share their values, but this meant the EFF wasn't welcome at their party. 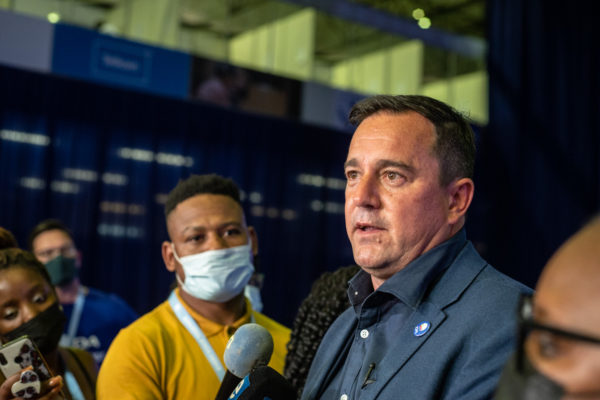 The DA and Freedom Front Plus (FF+) are willing to work together to stop the rot in the Mangaung Metro Municipality which the ANC had left in a disastrous condition and under administration, but not if it requires working with the EFF.

While 55% of the local government elections have been counted by late on Tuesday night, it was not yet clear where the metro was sitting as their votes had not been captured yet.

As it stood late on Tuesday, the ANC had 44% of the Mangaung vote, with the DA second with 31%, and the EFF in third place with 9%. The FF+ and Patriotic Alliance trailed with 5% and 3% respectively.

The metro had been facing scandal after scandal in the recent years.

This includes the placing of the metro under provincial administration in 2019, followed by the ousting of former mayor Olly Mlamleli following a motion of no confidence by the Freedom Front Plus, which, to ANC’s surprise, was supported by some of their own councillors.

The ANC in the metro was also deep embroiled in factional battles involving supporters of former Free State premier Ace Magashule and others.

Now, the the FF+ and DA said they were willing to work with parties that shared similar principles as them in order to restore the metro, but the EFF as an ally was not an option.

ALSO READ: WATCH: ANC ‘has to die’ if we want a prosperous SA, says Mashaba

FF+ member of parliament Wouter Wessels said they would only form coalitions with those who have the interests of their voters and community at large to “stop the decay”.

“We cannot afford another five years of ANC government, especially in the Mangaung metro. The ANC has completely failed Mangaung because of their political factions and the infighting and the lack of accountability, financial management, and a complete lack of delivery of their promises to the community.”

“But we will not form a coalition with a party which would be more detrimental for the community… We are not going into a coalition with the EFF because their policies will also be to the detriment, will not get the economy going and will lead to more unemployment in the Mangaung metro.”

As the DA celebrated their first outright win of the uMngeni municipality in KwaZulu-Natal by taking over 13 of the council’s 25 seats, leader John Steenhuisen said his mission was to ensure the ANC is brought below 50%. But they can do this without the help of the EFF, he told The Citizen.

“As you know, we have ruled out any coalition with the EFF, but where we can form coalitions with other parties that share values and principles, we will be prepared to do so.”

“We will work where we can with parties that share those principles and values and I am sure in the coming days and on the floor of the [result] centre, those conversations are going to start happening of where we fall short of a majority… Mangaung is an excellent example. Another five years of the ANC in Mangaung – I don’t think there will be much to fight for at the end of the five years. I think it’s important that where we can, we liberate those towns and cities from ANC’s mismanagement and misrule,” said Steenhuisen.

ALSO READ: FF Plus has a spring in its step as it sets sights on pummelling the DA