Mandela would’ve been dismayed by attacks on judiciary – Lamola

'We owe it to his memory to ensure that society lives up to the ideals that define the South Africa that he fought so hard for,' the justice minister said. 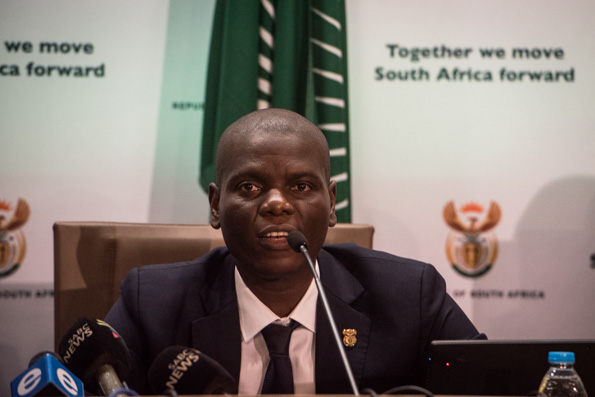 One can only imagine the dismay that former president Nelson Mandela would today express if he saw how “certain people cast aspersions and churn out irresponsible statements against the judiciary”, Justice Minister Ronald Lamola has said.

Lamola recalled how Mandela, in 1999, then still the sitting president, subjected himself to cross-examination during a court case which was brought against him by the then-South African Rugby Football Union.

He was speaking at an event on Tuesday celebrating Mandela’s release from prison 30 years ago, at the very house in which Mandela stayed at Victor Verster Prison, today called the Drakenstein Correctional Facility.

“Mandela subjected himself to cross-examination at a time when he was a sitting president. This was a clear example of what is meant by the supremacy of our Constitution. It was also a firm commitment to the Freedom Charter’s injunction which says: ‘All shall be equal before the law’.

“One can imagine the dismay that former President Mandela would today express if he were to see the manner in which certain people cast aspersions and churn out irresponsible statements against the judiciary.”

He said if someone like Mandela, who endured much pain and sacrifice in the realisation of freedom and democracy, was willing to subject himself to a court process, “there can never be any sort of justification towards unwarranted attacks on the judiciary and circumvention of the rule of law by any section of society”.

He said there were checks and balances in the judicial process, and those who were not satisfied with court decisions, could appeal.

“Decisions of judges are not above criticism, judges criticise each other. Academics criticise judgments, but it is done in a fair, balanced way, informed by the facts and the law. It is not unwarranted personal attacks on judges.”

He said all personal attacks on the judiciary should be condemned.

“We must never allow our country to descend to levels of other countries where police, prosecutors or even the judiciary… for them to do their job, they must negotiate with drug cartels and criminals.

“We must never degenerate to a state wherein lawlessness is acceptable.

“When that happens, institutions that are intended to serve the interests of society become compromised.

“This, as we have seen, has resulted in complete crippling of state-owned entities that are incapable of meeting their obligations today, like the provision of electricity, water, reliable trains and airlines, among others.”

He said the rule of law had to reign supreme.

“This is an era where we will not be silent to allow falsehoods to triumph, we will draw inspiration from Mandela and reconstruct this nation in the image of the Freedom Charter. We will not be derailed any longer. The dreams of our forebears can no longer be deferred.

“In Mandela, we see a continuous cause for justice. We owe it to his memory to ensure that society lives up to the ideals that define the South Africa that he fought so hard for.”