The Minister of International Relations and Cooperation said she found the comments rather 'astounding' and viewed them with great 'dismay'. 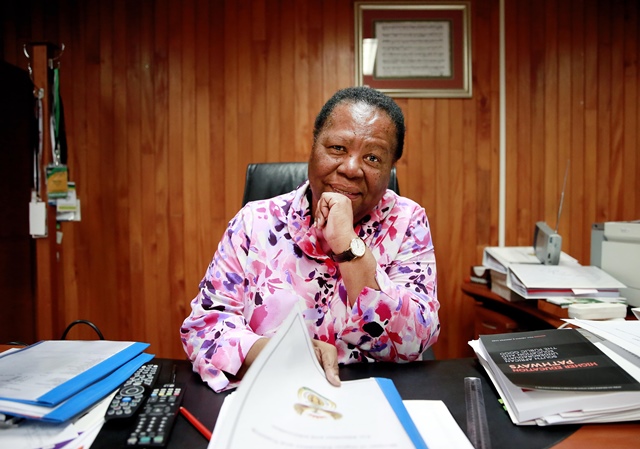 Minister of International Relations and Cooperation Naledi Pandor says she views comments by Chief Justice Mogoeng Mogoeng about the state of Israel “with great dismay”.

Mogoeng, who was joined by South Africa’s chief rabbi, Warren Goldstein during a webinar The Jerusalem Post hosted last week, answered in the affirmative when he was asked if South Africa’s “relations” with Israel should be improved.

He added: “Let me begin by saying I acknowledge, without any equivocation that the policy direction taken by my country South Africa is binding on me. It is as binding on me as any other law would bind on me, so whatever I have to say should not be misunderstood as an attempt to say the policy direction taken by my country in terms of their constitutional responsibilities is not binding on me. But, just as a citizen, any citizen is entitled to [criticise] the Constitution of South Africa, [and] is entitled to criticise the laws and the policies of South Africa or even suggest that changes are necessary – and that’s where I come from.”

Mogoeng then went on to quote verses from the Bible to explain his love for Israel. The chief justice also noted his love for Palestine.

The Jerusalem Post reported that he lamented South Africa’s adoption of a lopsided attitude toward the Israel-Palestinian conflict and said it would have greater influence if it displayed a more balanced approach.

Speaking to Radio 702’s Bongani Bingwa on Wednesday morning, Pandor was asked for her thoughts on and response to Mogoeng’s comments.

The minister replied: “Well frankly, I found the comments rather astounding and I viewed them with great dismay”.

When pushed further by Bingwa, Pandor added: “You know Bongani, I’ve made it very clear in a range of platforms that the minute we see positive movement by Israel, we would be the first to reach out, but while Israel continues with its intransigence and the denial of rights to the people of Palestine, rights that the chief justice enjoys by the way in South Africa and which he didn’t refer to in the alleged comments published by The Jerusalem Post.

“Once those rights are spoken to … that every human being deserves access to those rights, we will support the comments but you cannot in a situation of such conflict only refer to one party and the most powerful one that is practising the worst denial of human rights.”

On Monday, the Council for the Advancement of the South African Constitution (Casac) said Mogoeng’s comments “undoubtedly embarrassed the government and its international standing in respect of a key foreign policy position”.

Casac said Mogoeng should withdraw his remarks and apologise to all South Africans.

“The recent comments by Chief Justice Mogoeng Mogoeng pertaining to the legitimacy of the state of Israel as it seeks to unlawfully annex further areas of Palestinian land, brings the judiciary in South Africa into disrepute,” Casac’s Lawson Naidoo said.

“He has publicly opposed the policy of the South African government with regards to Palestine.”

On Friday, the EFF called on Mogoeng to withdraw his comments and to “join all progressive voices in an unequivocal condemnation of apartheid Israel”.

ANC national spokesperson Pule Mabe said Mogoeng had entered the arena of political commentary which might make him vulnerable should he adjudicate a human rights matter in the future.

Meanwhile, Africa4Palestine said it planned to lodge a complaint with the Judicial Service Commission.

“It is regrettable that the chief justice has publicly entered the Israeli-Palestinian issue on the side of the oppressors – the Israeli regime,” spokesperson Tisetso Magama said in a statement last week.

The South African Friends of Israel said it would host a visual protest on Friday in support of Mogoeng and his “love” for Israel.

“Christians in South Africa will not be silenced but we will stand up for our freedom of religion and expression.

“We fully support the right of Chief Justice Mogoeng Mogoeng to speak out and express his Christian views. Any attempt to twist his words and promote hateful agendas is deplorable and must not be tolerated,” it said in a statement.

The party said: “We consider this criticism as baseless and an attack on his constitutional rights of freedom of religion and expression”.

The South African Zionist Federation said Mogoeng’s ” heartfelt sentiments exposed the boundaries of the ANC’s support for the constitutional right of freedom of religion, thought and opinion”, SowetanLIVE reported on Tuesday.

“This assault is not simply on the chief justice but on the rights of the many millions of South Africans, Christian or not, who believe in Israel and her right to exist peacefully alongside the Palestinians,” the federation said.