'We applaud the patriotic action of the whistleblower, who lifted the lid on that transaction and alerted law enforcement authorities,' the premier said. 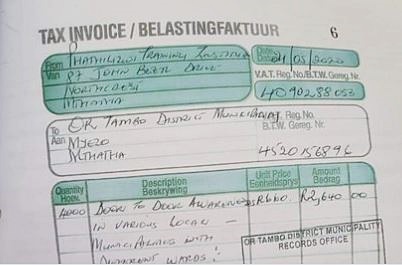 Eastern Cape Premier Oscar Mabuyane has written to President Cyril Ramaphosa to ask for the Special Investigating Unit (SIU) to probe alleged corruption worth R4.8 million in the OR Tambo District Municipality.

The allegations relate to a company that allegedly invoiced the district municipality R4.8 million for a four-day door-to-door Covid-19 awareness campaign.

Photographs of the invoice, and two Hawks hatchback cars parked outside the municipality’s offices, surfaced on social media at the weekend.

Concluding his weekly Covid-19 briefing on Tuesday, Mabuyane said: “Let me close with these two matters of critical importance. The first one is the alleged corruption that has raised its ugly head again in one of our municipalities, the OR Tambo District Municipality, in the form of a very suspicious so-called door-to-door campaign, which cost R4.8m.

“We were not surprised at all when it happened because we knew there will be chance takers, who would use this pandemic to get rich quick. Hence, from the onset, our Provincial Command Council Meeting directed all accounting officers to be on high alert during this time and pay particular attention to procurement related matters,” said Mabuyane.

“I have written to the president asking for the Special Investigating Unit to investigate the allegations that have surfaced in the OR Tambo municipality, which include alleged payment of money to service providers that have not done any work,” Mabuyane added.

“The investigation by the Hawks will reinforce the confidence of our people in the rule of law. We yearn for convictions in this case, so that even those who are thinking of doing similar crimes elsewhere can know that there is [a] price to pay for crime, and that is a long jail time,” said Mabuyane.

Questions sent to the district council’s speaker, Xolile Nkompela, and the municipal spokesperson, Zimkhitha Macingwana, were not answered by the time of publication. The response will be added once received.