Minster Dlodlo spoke about professionalising public service and the importance of keeping government employees safe when they report corruption. 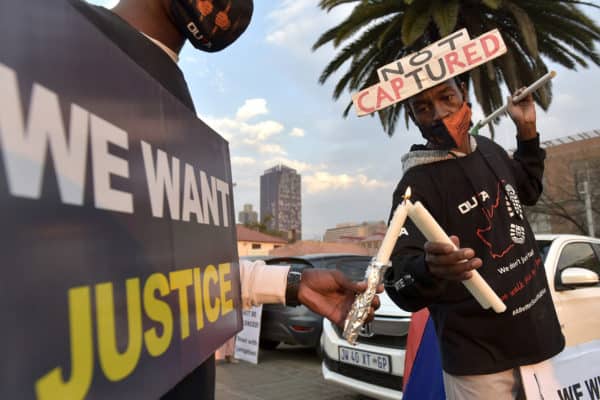 A candle light vigil held for corruption fighter, Babita Deokaran at Mary Fitzgerald Square in front of the Office of the Premier in Johannesburg, 26 August 2021. Deokaran was a witness in a corruption case and was recently killed in an apparent hit. Picture: Citizen.co.za/Neil McCartney

Minister of Public Service and Administration, Ayanda Dlodlo, spoke to Radio 702’s Bongani Bingwa on Friday about the protection of whistleblowers following the murder of Babita Deokaran.

Dlodlo said government employees deserved to work in an environment where they were free from harassment, violence and other occupational detriments.

Bingwa said it was hard to talk about public service without talking about Deokaran. The senior Gauteng department of health official tried to raise alarm about corruption but was sidelined, victimised and demoted.

In response, Dlodlo said the public service ministry released an internal guide on how to report corruption. She said departments needed to ensure employees who reported corruption were kept safe.

“We will not be cowed down by criminal gangs,” he said.

Makhura said government would work with the Special Investigating Unit (SIU) to uncover acts of corruption and ensure public funds looted from the state were recovered.

Moreover, a task team has been set up within the South African Police Service (Saps) to go after the perpetrators and ensure officials are kept safe from threats and intimidation.

The murder of Babita Deokaran

Deokaran, 53, was shot several times outside her complex in Mondeor, Johannesburg, shortly after dropping off her child at school on Monday morning.

Deokaran succumbed to her injuries later that day. The SIU confirmed she was one of its witnesses in its corruption investigations involving the procurement of personal protective equipment (PPE)

SIU spokesperson Kaizer Kganyago told The Citizen‘s Thapelo Lekabe that Deokaran was one of its witnesses, but could not be drawn into speculating on whether her murder was a targeted hit.