Child malnutrition may be worsening under the national lockdown, as food parcels fail to cater for child nutrition, a local civil organisation has claimed. 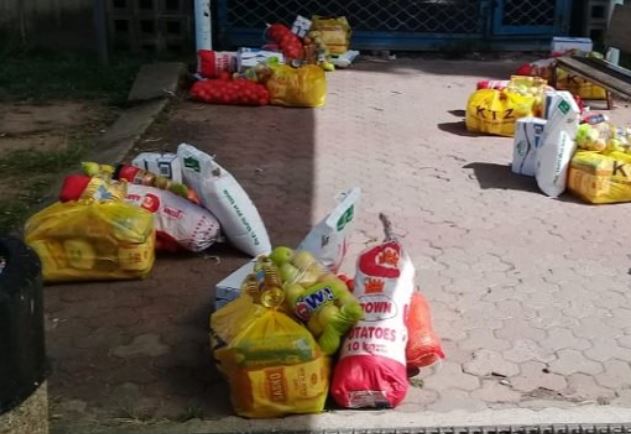 Food parcels in Giyani, Limpopo. Picture: @giyaniview (Note, this picture is used for illustrative purposes only.)

The South African Civil Society for Women’s, Adolescents’ and Children’s Health (Sacsowach) has called on the government to reconsider how they distribute food parcels and the items contained in them.

While child malnutrition has shown an increase over the last decade, it has now been thrown into the spotlight under the lockdown regulations, according to a statement by Sacsowach.

The statement follows comments by Dr Glenda Gray, a member of the Ministerial Advisory Committee (MAC) and chairperson of the South African Medical Research Council (SAMRC), in which she said there had been a spike in child malnutrition cases at Chris Hani Baragwanath Academic Hospital in early May.

She criticised the phased-out approach to the lockdown and called for the establishment of non-pharmaceutical interventions, such as handwashing, wearing masks, social distancing and prohibitions on gatherings – a statement for which she came under fire from health department acting director general Anban Pillay.Covid-19 is a threat to health and a major global disrupter; however, hunger has shown itself to be a more tangible threat.Precious Robinson

Chantell Witten from Sacsowach says: “The intensity and visibility of hunger has been catapulted into the spotlight during Covid-19. Long-winding queues for food parcels will be a feature of the pandemic that will stay with us for years to come. What is not in the eye of the public, however, are the malnutrition rates that underlie child deaths in South Africa.”

Based on the Demographic and Health Survey (DHS) – a report compiled by the national Department of Health, Statistics South Africa (Stats SA), the South African Medical Research Council (SAMRC), and ICF – stunting rates, an indicator for chronic undernutrition and a lack of food, have child malnutrition increased from 21% in 2008 to 27% in 2016.

Severe acute malnutrition remains a significant underlying cause of child mortality. It is still associated with one third of all child in-hospital deaths according to the 2018 interim report from the Committee for the Morbidity and Mortality of Children.

And while food parcels are being distributed to vulnerable communities, many of these fall short in providing for the nutritional needs of children, says Witten.

The organisation is now calling for a co-ordinated approach on all government levels to provide a standardised household food package with adequate nutrition for children and adults, to run alongside mid-upper arm screening of all children under five years old during Covid-19 household screening operations.

This programme should target the most in need to ensure they are serviced first and will require the direct monitoring and verification of food collection by beneficiaries via a USSD platform that can be mapped with GPS location.

“Covid-19 is a threat to health and a major global disrupter; however, hunger has shown itself to be a more tangible threat. We need to ensure sufficient and sustainable food supplies are made available to vulnerable communities,” says Precious Robinson, Chairperson of Sacsowach.