Eskom's own forecasts have projected that it won't meet demand in at least eight of the next 13 weeks. The grim reality of load shedding at Eskom will weigh on the country’s economy and psyche this year, with projections already suggesting it will continue to plague South Africa for months to come.

In at least eight of the next 13 weeks, (this one included), Eskom has forecasted that it will not be able to meet its reserve target and possibly not demand, which means load shedding is highly probable. In the week of 6 May it forecasts a definite shortage of demand and therefore load shedding is a certainty.

That is also the week during which South Africans will go to the polls for the general elections.

Eskom announced on Monday the second consecutive day of load shedding and, as on Sunday, it does not start with phase 1, but jumps directly to phase 2. However, phase 2 was quickly stepped up to phase 4 by lunch time on Monday and is expected to continue until 22h00 this evening.

This means Eskom has to shed 4,000MW of generation capacity to balance demand and supply and protect the national grid from total collapse.

On Sunday Eskom said: “This is as a result of a shortage of generating capacity. There is also a need to replenish and preserve emergency water and diesel resources to limit load shedding possibility or magnitude thereof in the following week.”

While the demand is generally lower over the weekends and one would expect Eskom to be in a position to meet it, the utility uses weekends to replenish the diesel stock for its emergency open-cycle gas turbines and pump the water out of its pump-storage schemes up the mountain to be ready for power generation when needed during the week.

These are two levers Eskom has at its disposal at relative short notice to supplement power supply, especially during the morning and evening peak periods. The pump storage schemes generate electricity when water falls from height, turning the turbine to set the process in motion.

Once the water has collected at the bottom of the scheme, it has to be pumped up to height before it can once again be used for power generation.

On Monday Eskom stated: “Although a number of generating units have returned to service as per the 9-point recovery plan, regrettably additional units continue to trip. This results in a shortage of generating capacity.”

According to Eskom’s Weekly system Status Report, the plant performance has been dire:

Measure this against Eskom’s 80% target and the 78% it assumed in its initial tariff application for the next three years.

Energy regulator Nersa told Eskom to revisit this number and Eskom adjusted it to around 72%, but even that might be unachievable in the light of the current 60-odd percent availability, regulator members said during the Nersa public hearings about the proposed tariff increase.

In its latest Weekly System Status Report Eskom disclosed how the peak demand in week five of 2019 compared with previous years:

Also compare the 28 880MW peak demand in week 5 with Eskom’s Net Maximum Capacity, which includes power imports and emergency generation resources. All in all, Eskom should have 46 292MW of generation capacity at its disposal, which would give it a generous reserve of 17 412MW. 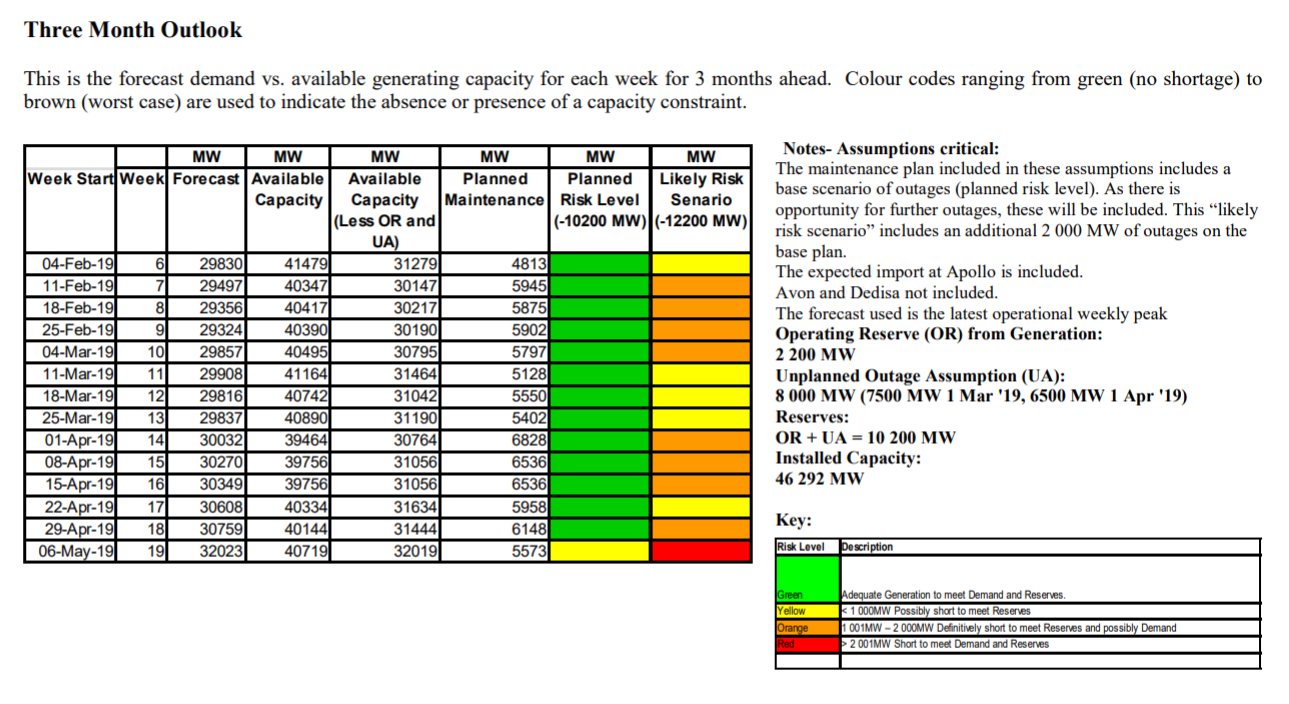