The same teacher was attacked by a parent last year, also for allegedly assaulting a pupil. 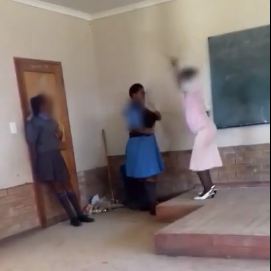 Screenshot of the video

Corporal punishment has been banned in South African schools since the dawn of democracy, but we still have teachers who resort to it.

African Reporter has received a video from a concerned parent showing a teacher from Michael Ontefetse Seboni Secondary School, in Duduza, on the East Rand, allegedly continuously beating a learner in front of other learners.

Teachers from other classes are seen walking into the class to intervene and pleading with the angry teacher to stop.

The concerned parent, who didn’t want to named to protect her daughter, a learner at the school, says she is concerned about the teacher’s attitude towards the learner.

“In the video the teacher is displaying the level of her anger. She was fighting with the learner and not disciplining her.

“My daughter has been complaining about the teacher being rude and harsh in class.

“Last year one of the parents attacked her after she allegedly assaulted her daughter in class,” the parent reports.

She contends the Gauteng department of education needs to intervene in this case before more damage is done by this teacher.

“We are not happy with the way the school is handling the matter,” she says.

The concerned parent says it was agreed on during a parents’ meeting that this kind of corporal punishment is no longer allowed in the school.

“The teachers can only reprimand the learner. If he or she continues to be ill disciplined in class, the parents are to be called to the school where they, in a meeting with the school, will agree on the form of punishment,” she says.

The Gauteng department of education was contacted for comment, and said that they were aware of the complaint and investigating the matter. Comment was still outstanding at the time of publishing.