Benoni sinkhole road repairs to be completed in August

The reconstruction started in January, but came to a halt until Level 3 lockdown was instituted. 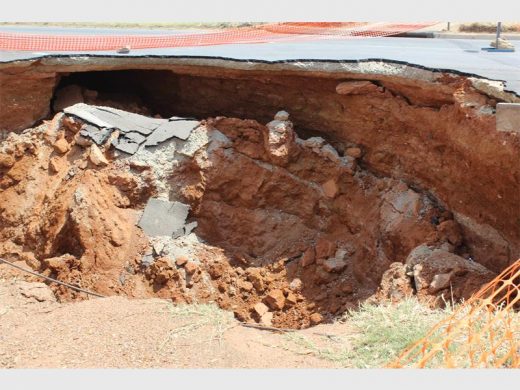 A portion of the sinkhole in Snake Road. Image: Supplied.

The construction repairs the sinkhole on Snake Road in Benoni is estimated to be complete in August, according to Democratic Alliance (DA) ward 73 councillor Sinethemba Matiwane.

In a statement released by the councillor, he highlighted that residents in the area and commuters relying on the Snake Road route have understandably become frustrated about the lack of visible progress in repairing the sinkhole, which was identified on November 2.

The remedial process of the sinkhole that measured 10m in diameter and 4m deep in November, was set to begin in February.

“As the ward councillor of the area, I have been actively engaging with the relevant officials responsible for the repairs and upgrades to ascertain a completion date.

“The road reconstruction initially began in January, but, unfortunately, the Covid-19 pandemic halted all construction work, which could only resume under level three regulations.”

Matiwane explained grouting is being undertaken, which means cement dust and crushed stone is pumped into the ground to fill all holes or gaps.

“After this is completed, the road will be reconstructed and services such as street lights, stormwater infrastructure, fibre and pavements will be restored,” he said.