The aspiring Maskandi recording artist, who goes by the stage name Khehla, says the guitar has been his pride and joy since he bought it in 2013. Ayanda Twala is a 28-year-old musician who has lost his most prized possession, his guitar, in a shack fire that destroyed nearly all of his belongings.

He was one of several residents who lost their homes and possessions when a fire razed through George Gogh informal settlement, Johannesburg, last week.

The aspiring Maskandi recording artist, who goes by the stage name Khehla, said the guitar had been his pride and joy since he bought it in 2013. Ayanda Twala (dreadlocks) and his friend stand horrified after their musical instruments were destroyed in a shack fire at George Gogh informal settlement.

Born into hardship in KwaZulu-Natal, the artist spend his earlier years in Emnambithi and Ladysmith, where he used to dazzle his teachers by performing at school assemblies with his friends. 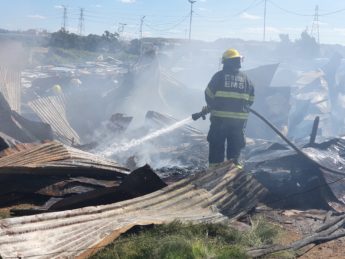 Firefighters put out a blaze at George Gogh informal settlement in Johannesburg.

He migrated to Johannesburg in 2010 to kick off his career in earnest and later managed to record his first album in 2013 at the legendary Downtown Studios.

But hardship persisted and Twala has been taking odd jobs to support his aspirations and just like many living in informal settlements, he has no other housing options. He now works as general worker at a school in Melvern.

“I have been playing that guitar for so long it was like my best friend. I couldn’t believe it,” he says in isiZulu.  “Before it was destroyed I was saving up to buy a new one, and now I have had to start again rebuilding my shack and getting my life back in order.”

Twala is living with a relative while he rebuilds his shack. He hopes to eventually raise the R5000 he needs to buy a new acoustic guitar and get back to his life’s passion. Ayanda Twala sheds a tear for his guitar outside the ruins of his burnt home at George Goch informal settlement.

Shack fires in Johannesburg have destroyed over 500 homes since January, stemming from several issues such as illegal connections and dangerous heating and lighting methods such as candles and open fires.

The last recorded data on shack fires showed that there were 5283 shack fires recorded by municipalities and reported to the Fire Protection Association of South Africa between 2016 and 2017. Another report shows that between 2009 and 2012, there were 5000 informal settlement fires reported.

Child hunger: Society has failed to cater for its most vulnerable, study reveals
8 hours ago
8 hours ago

Child hunger: Society has failed to cater for its most vulnerable, study reveals
8 hours ago
8 hours ago