WATCH: Four dead, one critical as gun store catches fire and ammunition is set off

A 15-year-old boy is among the four people that died when a fire started in a gun shop in Glenanda. 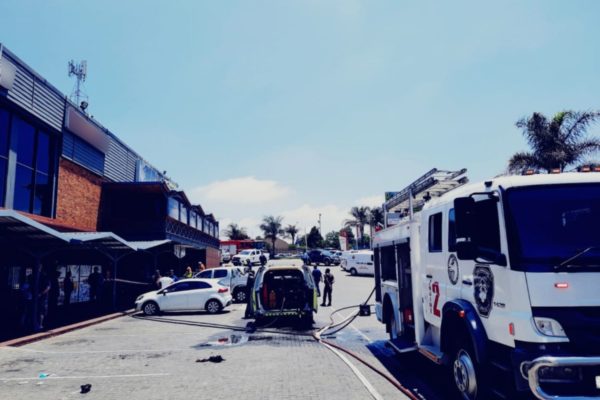 Emergency medical services on the scene where a gun shop caught alight in Glenanda, south of Johannesburg, on Friday. Photo: Supplied/ER24

Four people, including a 15-year-old boy, have been killed while another man is critically injured after a fire broke out at a gun store in Glenanda, south of Johannesburg, on Friday.

ER24 said three men, a woman and a teenage boy were all inside the gun shop when the fire started. They were all reportedly pulled to safety by bystanders.

“Medics assessed the patients and found that all five patients were critical, with their vital signs rapidly diminishing.
CPR and advanced life support interventions were immediately initiated in an effort to stabilise the patients. Unfortunately, after some time, the two men, a woman and a young boy, succumbed to their injuries and were declared dead,” ER24 said in a statement.

WATCH: Suspect sets car full of ammo on fire before shooting himself in chest

The critically injured man was taken to a nearby hospital.

In a live video on Facebook, ActionSA’s candidate ward councillor for the area Sarah Wissler said “there’s live ammunition going off, please stay away from this area”.

Wissler’s footage showed smoke billowing out of the shop, while loud bangs can be heard as the ammunition is set off.

Local authorities were with emergency medical services on the scene for further investigations.

At this stage it is unclear how the fire started.