During the first phase of the lockdown, it only offered death registrations, temporary identity certificates and the re-issue of birth certificates. 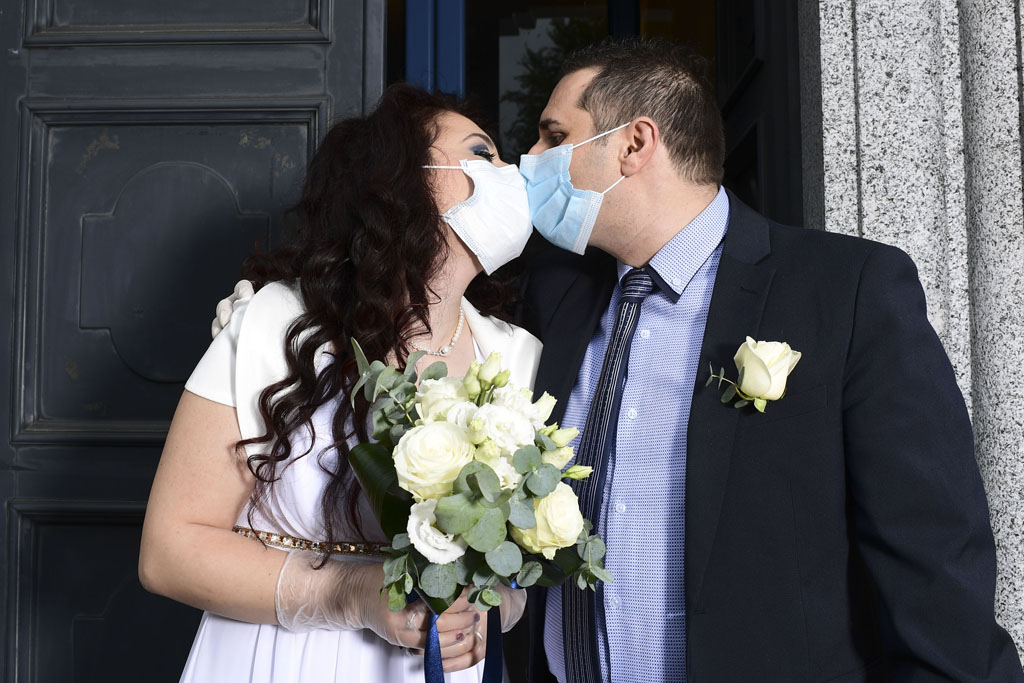 Picture for illustration. Newly-wed Italians Ester Concilio (L) and Rafaele Carbonelli kiss while wearing face masks following their wedding ceremony at the Briosco's town hall, about 45 km ( 28 miles) north of Milan, on May 11, 2020 during the country's lockdown aimed at curbing the spread of the COVID-19 infection, caused by the novel coronavirus. (Photo by Miguel MEDINA / AFP)

While it is clearing the backlog in birth registrations created by level 5, the Department of Home Affairs is considering allowing the registration of marriages when the country moves to level 3.

This after the department addressed a portfolio committee on Tuesday.

“The department had an estimated backlog of 81,650 [registrations] at the beginning of level 4 lockdown,” its acting director-general, Jackie MacKay, told the committee.

“Of the aforementioned backlog, the department registered 46,541 births which represent 57% of the above, estimated backlog.”

MacKay said this meant the department was left with 35,109 births to be registered from the backlog, but during that period, 8,989 births for newly born babies were registered at health facilities.

“To date, the department has registered a total number of 55,530 births within a period of seven working days.

“The department is likely to clear the estimated backlog on birth registrations within five days, should the situation remain unchanged.”

The department started registering births again from 1 May. During the first phase of the lockdown, it only offered death registrations, temporary identity certificates and the re-issue of birth certificates.

MacKay said the demand for the re-issuance of birth certificates and temporary identity certificates remained high.

People were, however, less enthusiastic to pick up their smart ID cards. Of the reported 412,686 uncollected cards only 29,475, or 7%, were collected.

“The department will intensify its communication strategy to encourage clients to collect identity documents that are currently in front offices,” he added.

The committee was generally impressed that the department had managed to make substantial inroads into the backlog.

MacKay said there was a growing demand for the department’s services and a need to identify areas to be relaxed during further stages of the lockdown.

The department proposes to allow the registration of marriages during level 3. This will take place per appointment.

Adjudication of applications will be per appointment as per the birth and death registration regulations.

Last Wednesday, President Cyril Ramaphosa announced the country would drop to level 3 of the nationwide lockdown by the end of May, but some parts of the country with higher Covid-19 infection rates would remain at level 4.

On Friday, the Presidency said the country could move to level 3 before the end of the month.