DA chief whip Natasha Mazzone said it was clear the EFF was trying to 'make the House ungovernable' and suggested it be ejected from the virtual platform. 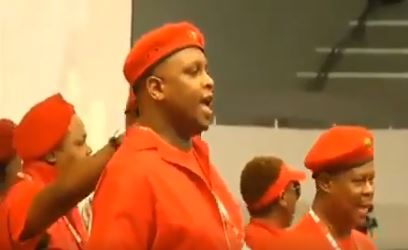 Picture for illustration. Screengrab of video of EFF second in command Floyd Shivambu as he sings and dances at Nasrec during registration for the EFF's second National People’s Assembly, 13 December 2019.

The National Assembly had its first vote in the virtual environment, despite the EFF’s attempts to derail the process.

After it dealt with two procedural motions on Tuesday afternoon – one to establish an ad hoc committee to select a new candidate for Auditor-General – its first order was to adopt the rules governing virtual sittings.

Before the rules’ adoption, EFF chief whip Floyd Shivambu asked for a division. This means there will be counted votes – a first for a virtual, hybrid sitting of the National Assembly.

Shivambu asked what rules they were going to vote with in the virtual system.

House chairperson Grace Boroto said it was in terms of rule 6(2).

This rule, under the heading “Unforeseen eventualities”, reads: “A rule framed by the Speaker remains in force until the House, based on a recommendation of the Rules Committee, has decided thereon.”

These rules were also discussed at meetings of the chief whips forum and National Assembly Programming Committee, where the EFF has representation.

Nonetheless, several MPs continued to question which rules the voting will take place.

“ICT, please mute everybody,” Boroto said. “We can’t be held to ransom by them.”

DA chief whip Natasha Mazzone said it was clear the EFF was trying to “make the House ungovernable” and suggested it be ejected from the virtual platform as it would be from the House.

After the voting, the EFF still questioned under which rule it occurred. EFF MP Mbuyiseni Ndlozi claimed it was never explained to them.

“I have explained that at length,” Boroto sighed.

When asked to indicate how the EFF voted, Shivambu again questioned the rules, and Boroto said if they did not indicate how they voted and how many EFF MPs were present, she would take it they have abstained.

After another attempt to elicit an answer from the EFF, she took it they had abstained.

All other parties supported the rules and it was adopted.

Thereafter the sitting, with some MPs in the chamber in Cape Town and others joining in through the virtual platform, proceeded smoothly.

Three bills –- the Recognition of Customary Marriages Amendment Bill, the Prescription in Civil and Criminal Matters (Sexual Offences) Amendment Bill and the Social Assistance Amendment Bill – were passed and will be sent to the National Council of Provinces for consideration.

The National Assembly also approved the candidates to fill vacancies on the board of the Council of Independent Communications Authority of South Africa (Icasa), following the removal of Ruben Mohlaloga as a councillor and chairperson of the council. The other four vacancies became available due to the end of the term of four councillors in April 2020.