Speaker appointing panel to decide on Mkhwebane’s removal – or not

Meanwhile, Mkhwebane has approached the Western Cape High Court for an interdict against the removal proceedings, among others. 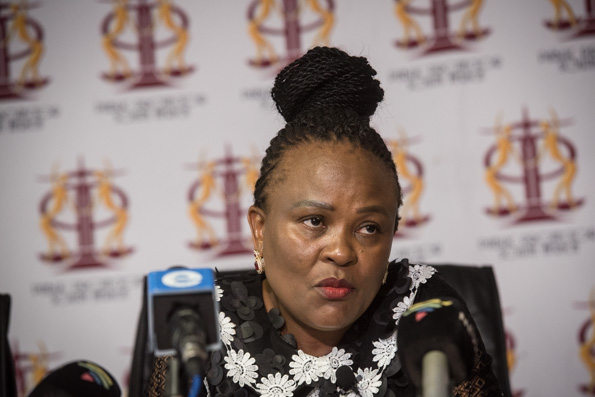 National Assembly Speaker Thandi Modise is in the process of appointing three people to serve on a panel which will determine whether there is a case to be made for Busisiwe Mkhwebane’s removal as public protector.

“Letters of invitation to serve on the panel have been sent to the three persons. In addition to indicating their availability to serve on the panel, they have also been asked to indicate if they believe the process over which they will preside is possible within the current Covid-19 restrictions,” parliamentary spokesperson Moloto Mothapo said in a statement on Friday.

“The names of the panel members will be announced once the process of appointment is concluded.”

In December, DA chief whip Natasha Mazzone lodged an initial motion to institute Mkhwebane’s removal – three days after the National Assembly adopted rules for the removal of the head of a Chapter 9 institution, such as the public protector.

Modise gave the green light for the motion, but Mazzone withdrew it and lodged another with more evidence. Modise also approved this motion and asked parties in parliament to nominate candidates for a panel of three independent people to assess whether there is a prima facie case for Mkhwebane’s removal, as the rules required.

But before Modise appointed the panel, parliament rose for its constituency period and the country was placed under lockdown due to the Covid-19 pandemic.

The rules specify that the panel must comprise three fit and proper South African citizens who, collectively, possess the necessary legal and other competencies and experience to conduct the preliminary assessment.

If a judge is appointed to the panel, the speaker must make such an appointment in consultation with the chief justice.

One of the panellists must be appointed chairperson of the panel. The panel must complete its assessment and report, which must include recommendations with reasons and any minority views of panellists, to the National Assembly within 30 days of its formal appointment.

In determining whether there is prima facie evidence to sustain the motion’s complaints, the panel may, in its sole discretion, provide any National Assembly member with an opportunity to place written or recorded information before it within a specified time frame.

The panel must also, without delay, provide the incumbent – in this case, Mkhwebane – with copies of all information available to it relating to the assessment. It must also provide the incumbent with a reasonable opportunity to respond in writing to the relevant allegations against her. The panel may not hold oral hearings and will be limited to an assessment of the record before it.

Meanwhile, Mkhwebane has approached the Western Cape High Court for an interdict against the removal proceedings, and to have the rules for the removal of the head of a Chapter 9 institution declared invalid.

The case was due to be heard in the last week of March but the parties agreed to postpone it to a later date.