ANC member Mxolisa Sokatsha defended his fellow cadres and said they did not block the report. 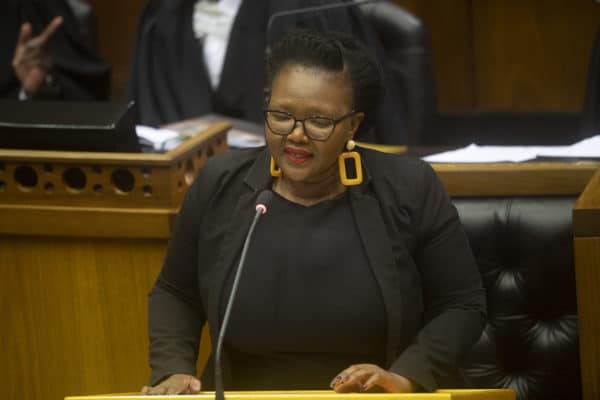 National spokesperson of the Democratic Alliance (DA) Siviwe Gwarube on Friday told African National Congress (ANC) members who are also part of the portfolio committee on health to hang their heads in shame following the publication of the SIU report on the Digital Vibes communication contract and subsequent suspensions of senior health department officials.

Health Minister Joe Phaahla on Friday gave an update on the department’s plan of action following the findings and recommendations of the SIU’s report, which implicated several officials, who have since been suspended.

Committee members posed questions to Phaahla and his team today, where Gwarube accused ANC members of failing the nation by allegedly blocking a meeting that would have seen former health minister Zweli Mkhize answering questions on the matter a few months back.

“I do want to say this because it would be amiss for me not to say it. A couple of months ago, this committee, a number of people in this committee said it was critical that the former minister and the senior management of the department be summoned to answer questions around this particular matter,” said Gwarube.

“Members of this committee, a number of them, particularly members of the ANC, shielded the former minister from accountability and blocked that meeting from happening, talking about sub judice rules and how the matter could not be properly ventilated, and now with the publication of this SIU report, it is absolutely clear to us that we, because of the majority that is held by the governing party in this committee, we failed in our duties because we had an opportunity to pose direct questions to the former minister but we didn’t do it because we were blocked from doing it. I do want to say that the members of the ANC in this committee must hang their heads in shame because not only did they block accountability but they failed the people of South Africa.”

ANC member Mxolisa Sokatsha defended his fellow cadres and said they did not block the report.

“I don’t think ANC members blocked this report; our understanding as ANC members was that the SIU was still busy with the investigation, so that’s why we’re having this meeting about the report today. It’s malicious for a member to say the ANC blocked the report, I don’t think that’s correct,” said Sokatsha.

Responding to Gwarube on the department’s plan to ensure stability following the suspensions, Phaahla said people from other departments had been pulled in to focus on urgent matters within the department.

“The stability in the department is top priority. The department has pulled people from other departments to focus on urgent matters and rearrange their focus. It’s too early to measure how the digital vibes suspensions have affected the vaccination drive,” he said.

He further admitted there had been a failure in internal audit processes as the Digital Vibes matter was initially flagged by the office of the auditor-general.

“We have to look at it and ensure we receive reports on a regular basis and not just rely on the AG to tell us what is happening in our own department. Some of the systems in there have shortcomings,” he said.

Corroborating Sokatsha’s version of the order of events, Phaahla said the department was ready to issue letters of the intention to suspend implicated officials when the SIU stepped in and asked for an opportunity to thoroughly investigate the matter.

“After that report, there was an attempt by the DG then to start the process against the officials implicated by the Ngubane report. But the SIU then came in to say ‘please hold any action because we don’t want duplication, let us complete our comprehensive investigation’, and at that time, there were a number of officials who were already flagged but because of the fact that the SIU had indicated that they wanted a more thorough investigation, the processes, including the issuing of letters of intention of suspension, were halted by the SIU.”