'Ramaphosa is rallying all of the support he can get because Ace Magashule’s faction, which is very powerful, is coming down hard on him,' an expert says. 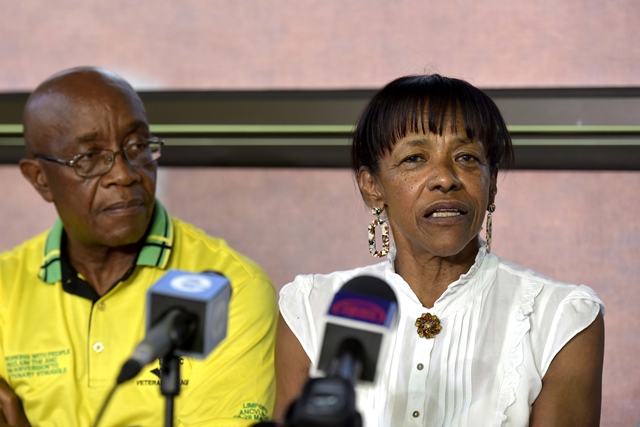 Cheryl Corolus and Snuki Zikalala brief media about the plans of a group of ANC elders that want to hold the ANC accountable and steer it in the right direction at Liliesleaf Farm in Sandton, 27 March 2019. Picture Neil McCartney

President Cyril Ramaphosa is engaged in a fierce power struggle in the ANC and corruption allegations surrounding his son were stoking the fire, according to political analyst Andre Duvenhage.

The ruling parties’ concerned elders, in a briefing yesterday, concurred the ANC leadership was embroiled in a “fight for the soul of the ANC”, as party veteran Cheryl Carolus put it.

Their press briefing was a bid to convince members accused or found guilty of wrongdoing to remove themselves from the party’s election lists.

But the group made light of revelations emerging from the Commission of Inquiry into State Capture implicating Ramaphosa’s son, Andile, via contracts with embattled former Bosasa Group.

Yesterday, Ramaphosa issued a statement through his spokesperson, Khusela Diko, responding to media reports suggesting that Bosasa’s business dealings with his son were connected to allegations that the ANC had directly benefitted from Bosasa’s business with government.

“The presidency has noted several media reports and commentary on testimony before the Zondo commission yesterday that conflate a number of separate issues,” read the statement.

Ramaphosa reiterated his commitment to appearing before the commission and that he “was made aware of the business relationship between his son’s business and African Global Group (Bosasa’s new name) in September 2018 after he was informed there was a rumour that Andile Ramaphosa had received a payment of R500 000 (from Bosasa)”.

Diko said: “There is no allegation of any illegal activity levelled against Andile Ramaphosa, including at the state capture commission.”

The ANC veterans’ Mavuso Msimang reiterated this yesterday, saying that unless they had reason not to trust his word, Ramaphosa’s claim of ignorance should be considered.

The veterans were adamant that “tainted” party members who appeared on the election lists should step aside, insisting that voters, the party and the nation should stand behind Ramaphosa in the coming election, primarily because the party was in the process of self-cleansing.

But Duvenhage argued that the veterans’ move was a clear sign of desperation in Ramaphosa’s camp amid the onslaught of rival groups born out of former president Jacob Zuma’s still powerful faction.

“Ramaphosa is fighting a battle for survival now at all levels and he is rallying all of the support he can get because Ace Magashule’s faction, which is very powerful as evidenced by those lists, is coming down hard on him.

“Ramaphosa is in serious trouble at the moment,” he said.

The veterans admitted that the ANC’s internal electoral system made it vulnerable to the abuse of power by factions and alliances.

“The present structures of the ANC allows for a few people … a small fraction of those people are allowed to vote.

“Now we have said, as veterans and as other structures, that this electoral process is not conducive to overcoming many of the problems you find.

“And we have put forward some of those positions and some were discussed at the policy conference. That didn’t get a lot of buy-in but we will continue knocking on that door,” he said.