The party accused government leaders in the province, along with the infamous brothers, of benefitting from state funds. 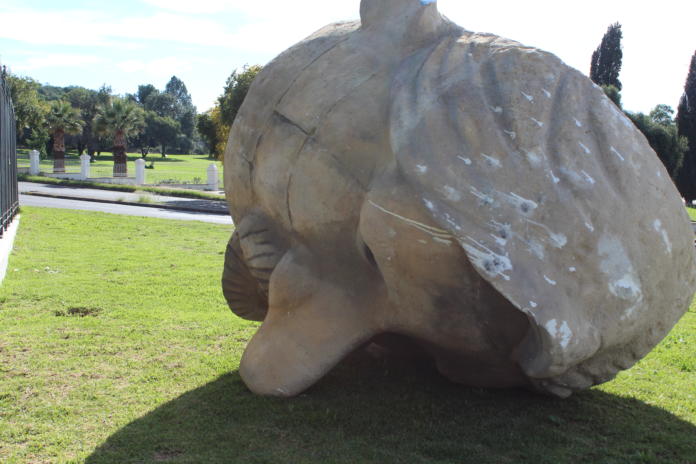 The controversial statue of one of the Gupta brothers fell flat on its face outside the Free State House on Monday. PHOTO: SEITHATI SEMENOKANE

The Democratic Alliance (DA) in the Free State has placed a controversial statue of one of the Gupta brothers outside the Free State House on Monday.

This comes after the uproar that followed the placement of the same statue outside Waaihoek Wesleyan Church during party leader Mmusi Maimane’s visit to Bloemfontein last week.

Bloemfontein Courant found the statue toppled over on a green lawn outside the government building opposite Oliewenhuis.

ALSO READ: Ajay Gupta no longer a fugitive from justice

“The statue is symbolic of the Guptas and their relationship with the ANC in the Free State’s leadership,” said DA Premier Candidate, Patricia Kopane.

Kopane accused government leaders in the province along with the infamous brothers of benefitting from state funds.

“The executive members of the Free State were supposed to stand up and stop corruption, but because they were the beneficiaries of corruption, they did nothing. That’s why the Guptas had been given a lot of money at the expense of the people,” she said.

However, Premier’s Office spokesperson Tiisetso Makhele said that they would not entertain the campaigning methods of the opposition party.

“The Free State Provincial Government is not focused on the DA, its statues or its political campaigns,” said Makhele.

“We are focused on delivering service to the masses of our people. Any enquiry on the purported statue must be sent to the DA. We speak on service delivery and matters pertaining to our people,” he said.

Last week, the Saul Msane Heritage Trust expressed its disapproval of the party placing the styrofoam statue outside Waaihoek.

“The DA has crossed the line of its campaign trail,” the trust said in a statement.