Hundreds gather to protest against ‘Bantustan Bills’ in Pretoria

These bills reportedly allow homeland chiefs to make deals with big business, chase people off their land, and force people to attend a traditional court. 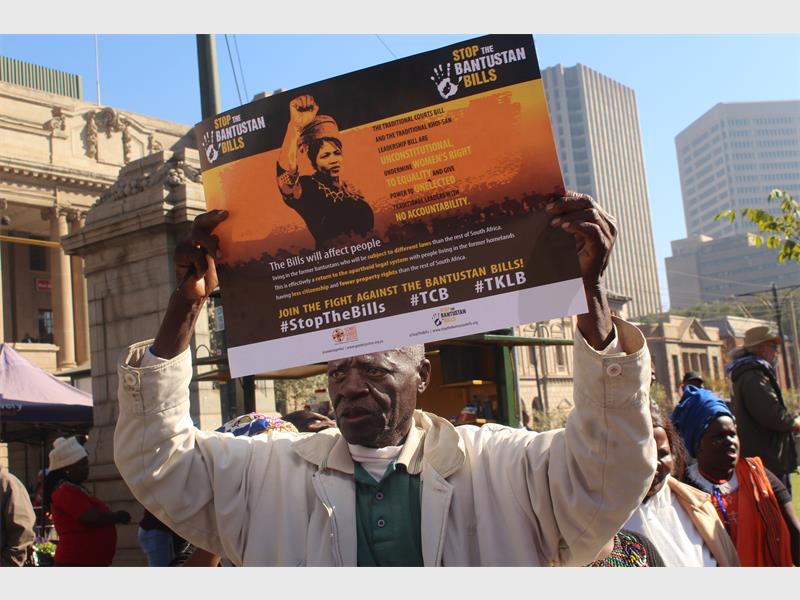 Hundreds gathered at the Union Buildings on Wednesday morning to protest what they called “Bantustan bills”.

The protesters called on President Cyril Ramaphosa not to sign the Traditional and Khoisan Leadership and Traditional Courts Bills, reports Pretoria East Rekord.

“If these two bills are passed into law, they would effectively bring back apartheid-era Bantustans,” said Alliance for Rural Democracy (ARD) spokesperson Constance Mogale.

“These bills will allow traditional leaders to enter into deals with mining companies without the consent of the communities whose land rights would be affected,” she said.

“The Traditional Courts Bill will force people in rural areas to appear in the courts of traditional leaders without the choice of going to magistrate’s courts.

“Put simply: if made into law, these bills will allow homeland chiefs to make deals with big business, chase people off their land, and force people to attend a traditional court.”

Mogale said although traditions and culture needed to be respected and protected, it should be ensured that all people had democratic powers and equality before the law.

“These bills do not do that,” she said.

“The Traditional and Khoisan Leadership Bill does recognise the Khoisan people; however, the rest of this bill is about giving new oppressive powers to unelected chiefs – just like the apartheid government did.”

Protester Grace Maledu, from Rustenburg in North West, said she was “not happy with the two bills”.

“They give traditional leaders too much power,” she said.

“They took our land, demolished our houses and graves to use the land for mining. However, we are not benefiting at all. We were not even consulted about these mines. There are minerals in our villages, but we are getting nothing from these minerals. Instead of our communities being developed through these minerals, investors from overseas are benefiting from our land.”

All provinces except the Northern Cape and Western Cape were represented at the protest.

Most of the protesters told Pretoria East Rekord they were unhappy with traditional leaders in their community because “they take decisions on their own without consulting the community”.

“They say we have a democratic government,” said Mogale. “Yet our traditional leaders continue to suppress us in the villages. They do not even inform us on things happening in our own communities. Instead, what they are good at is collecting money from every household.”

The presidency was given seven working days to respond.