I became a victim of the ‘rogue unit’, Sisulu is next, claims Malema

The EFF leader has warned the president to be careful when dealing with 'the chapter 9 institution' if he doesn't want to end up like Zuma. 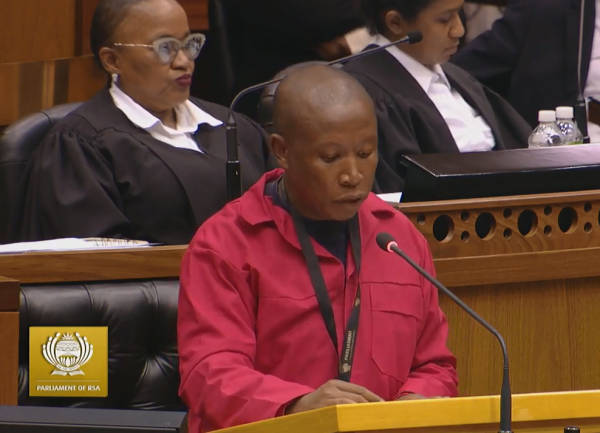 Ramaphosa has filed an affidavit in support of Gordhan’s bid to stop the implementation of Public Protector Busisiwe Mkhwebane’s remedial action following her report on the “rogue unit”.

But the EFF leader warned it was this kind of behaviour on the part of the president that would make life difficult for him in parliament. He said Gordhan should have followed in the footsteps of Deputy President David Mabuza by stepping aside until his name was cleared.

“What kind of a president are you, who when presented with hardcore evidence of the most dangerous activities you still don’t act? The reality is that the rogue unit was not started with a directive of any sitting president and did not report to him. This means whoever they reported to was as powerful, if not more than a sitting president.

“We’re going to use this parliament to put pressure on you and your friends who are coming from the cabal to respect the chapter 9 institution. I don’t care who occupies that office, it must be respected. If Pravin respected you and the “new dawn”, he would do what Mabuza did and step aside until his name is cleared. Give him that advice in your caucuses. You even join in interdicting the remedial action of the public protector in protection of an individual against the chapter 9 institution. When the country and parliament degenerate, you’ll have yourself to blame.

“Mr. President, like Zuma you’ll begin to hate this parliament and do everything in your power to stay away from it simply because you want to protect an individual against the chapter 9 institution,” he said.

He further warned the president that should he fail to respect the chapter 9 institution, he would end up like like Zuma, who was now answering to the state capture commission “like a lost soul”.

“These tendencies that are coming from your side in defiance of a chapter 9 institution in isolating young people with talent, it means you’re canvassing the same ground that Zuma canvassed before. We did not fight with Zuma because he was ugly, we fought with him because he undermined institutions of the state. You’re doing the same.”

Malema advised the president to solve issues around Gordhan, failing which the EFF would do it as it was not afraid of him.

The EFF leader further suggested that it was not the president who was running the country, but a group of people who were running it on his behalf. He alleged that the job of this “media cabal” was to “lynch” anyone who spoke against those it was in favour of – mostly those who spoke against the “rogue unit”, which he claimed to also have been a victim of after submitting documents with information on the unit.

“The rogue unit and its political principals are primarily at the helm of a media cabal and faction whose role is to lynch anyone who exposes or speaks against the formation of the unit and its illegal activities.

“I became a victim of this unit. I went to them in 2010 and gave them a document which contains all this information. After I left, all my problems started.”

Its next victim, according to Malema, would be Sisulu.

“Their next victim is Minister Sisulu because they’re projecting her as a person who’s competing for the presidency. Next they will character assassinate her. There was a report that was compiled about the cabal,” he claimed.