With more than one hundred branches, the eThekwini region is one of the strongest points of power for the ruling party. 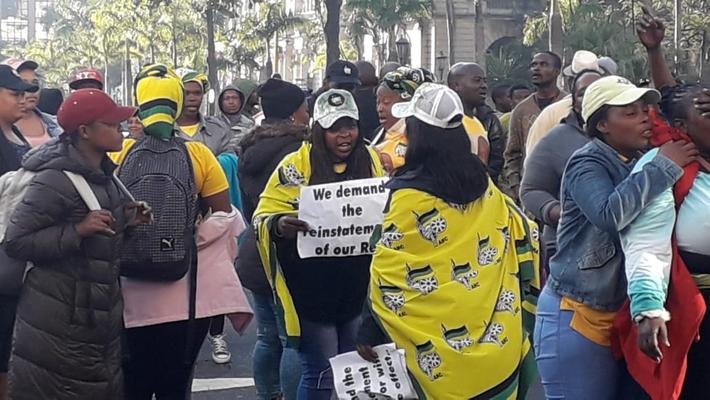 Supporters of criminally-charged eThekwini mayor Zandile Gumede gathered in the Durban central business district on Thursday demanding she be allowed to return to work after being placed on leave by the ANC. Some of the supporters had attended a night vigil on Wednesday and resumed their protests in the morning. Photo by African News Agency (ANA).

The biggest ANC region in the country, eThekwini, will be heading to its elective conference before the year is out, a ruling party spokesperson has said.

“As far as we are concerned, preparations are going well. All regions in the province, including eThekwini, will be going to conference before the end of the year,” provincial spokesperson Ricardo Mthembu said on Tuesday.

He was speaking to News24 ahead of a provincial working committee (PWC) report that will be handed to the leadership this coming weekend.

“Once we receive the report, we will announce when all conferences in the province will be held.”

Mthembu said the ANC was focusing on organisational renewal and how party members should conduct themselves.

“They are engaging each other. It is the branches who must engage and come up with resolutions so regions will be united after conferences. We are motivated by engagement from comrades.”

The spokesperson for former eThekwini mayor Zandile Gumede, Mzomuhle Dube, said her supporters were upbeat and humbled by the support that had been shown to her.

“Sometimes, you think branches will do things differently but here are indications that support is good.”

He said Gumede enjoyed huge support in Umlazi and Pinetown.

“They came to mama Gumede and pledged their support. We are happy, but cautious. Sometimes, when you think you are enjoying majority support, you cannot behave like a person drunk with power.”

Gumede was ousted from power in eThekwini after the ANC found she was underperforming in her duties as mayor of the powerful metro.

She was also arrested by the Hawks after being implicated in a multimillion-rand Durban Solid Waste (DSW) tender. Gumede is accused of using her political power to influence supply chain processes.

During her struggle to retain power in the region, she brought the city to its knees with her ardent supporters taking to the streets and voicing their displeasure at her removal from office.

With more than 110 branches, the eThekwini region is one of the strongest points of power for the ruling party.