Carl Niehaus, who appears to be the group's leader, made the announcement today at a meeting also addressed by BLF leader Andile Mngxitama. 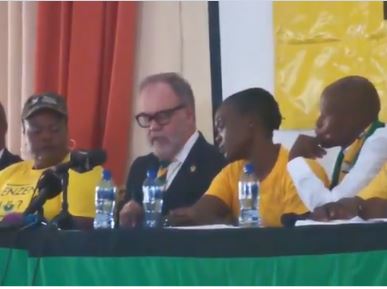 The Gauteng Radical Economic Transformation President Zuma Support Group says it will embark on “rolling mass action” to show their support for the former president and air their concerns.

Carl Niehaus, who appears to be the group’s leader, said this at a media briefing on Wednesday.

It was attended by dozens of Zuma supporters, some of who drank dumpies outside the event and others who voiced their dissatisfaction at some questions asked by reporters.

Niehaus spoke of what the group termed Judge Dhaya Pillay’s unfairness towards Zuma in issuing an arrest warrant after he failed to appear in the High Court in Pietermaritzburg last week for his corruption trial.

Niehaus said Pillay “lifted the veil of Lady Justice” and has tarnished the reputation of the judiciary.

But when asked if Niehaus or the group would lay a complaint before the Judicial Service Commission given their very serious accusations against Pillay, Niehaus said while this was an option, the situation could only be resolved by “registering our deeply felt anger and protest”.

This, Niehaus said, will include a march to Luthuli House to hand over a memorandum of concerns, marching to the head office of the National Prosecuting Authority “to register our outrage” and finally making an appearance outside the High Court in Pietermaritzburg on May 6, when Zuma is set to appear again.

Niehaus has been a vociferous supporter of Zuma and has had a close relationship with ANC secretary general Ace Magashule.

In 2009, Niehaus admitted a number of untoward activities and transgressions to the Mail and Guardian, including forging signatures during his time at the Gauteng Economic Development Agency, being indebted to certain ANC members and business people, and receiving money from the likes of Brett Kebble because he was “desperate for financial help”.

Medical-record leak not an 'actionable violation' of Zuma's rights, says court
14 hours ago
14 hours ago

Medical-record leak not an 'actionable violation' of Zuma's rights, says court
14 hours ago
14 hours ago