DA will be SA’s shield against ‘fascist thugs’ – Mazzone

Alan Winde, premier of the DA-led Western Cape, says it would continue delivering services, especially healthcare, to the most vulnerable. 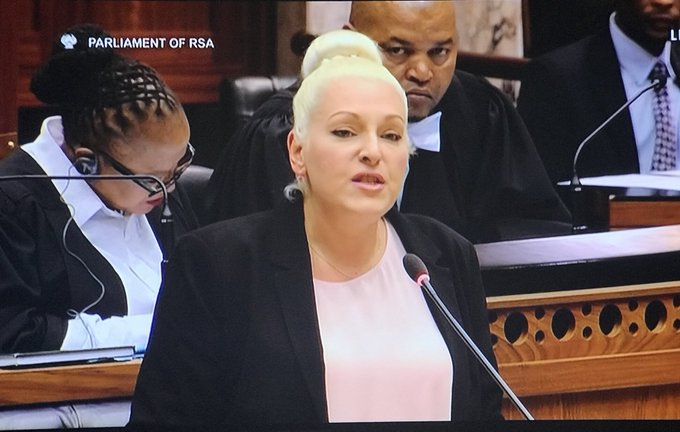 Mazzone was one of the key speakers who delivered opening speeches at the DA’s virtual elective congress which started on Saturday.

The party has accused Malema of inciting violence by using inflammatory language after he posted a picture of a machine gun in the wake of unrest in Senekal in the Free State where farm manager, Brendin Horner was killed.

“Under our leadership, no Gucci revolutionary group of fascists thugs will be allowed to terrorise our country. We have laid criminal charges against the EFF for incitement of violence, we have reported their hatred and racist remarks to the Human Rights Commission and we have used every avenue available in Parliament to hold them to account,” she said.

She said it was clear that the ruling party could not navigate the nation through the Covid-19 pandemic.

“It was a time for us to unite as South Africans and fight this virus with our collective might. Unfortunately, after the initial three-week lockdown period it became frighteningly apparent that the governing party [was] unable to steer us through this unprecedented time.

“The DA did what we do best, we took the lead. Immediately, a Covid-19 recovery plan was developed. The wheels of justice may turn slowly, but turn they do. We are finally seeing the fruits of our labour as those who tried to steal the state, piece by piece through the web of state capture, are brought to book,” she said.

Midvaal mayor Bongani Baloyi said that for South Africa to achieve more, all citizens should hold hands to address the country’s most pressing challenges.

“A better future is possible when we work together advancing our call to serve the people of South Africa. The success of democracy is based on good governance and institutions free of corruption. This is what the DA can deliver. For the past decade we have been receiving numerous awards. This did not just happen; it was because we took a firm decision to stick to good governance,” he said.

DA policy head Gwen Ngwenya said it was not too late for the country to change its fortune.

“The national government response to Covid-19 has worsened an already desperate economic situation. There are actions that will make a country poor and actions that will make a country prosper. The government has created an environment where it is easy to do business and get ahead in life if you have a political connection, but it’s very hard when you’re an honest, hard-working South African,” she said,

Alan Winde, premier of the DA-led Western Cape, said it would continue delivering services, especially healthcare, to the most vulnerable.