Mkhwebane ‘a hired gun’ says Mbaks, as her support grows

Beside the Magashule-aligned ANC faction, the EFF and ATM also back the Public Protector, but some ANC members disagree with their SG's stance 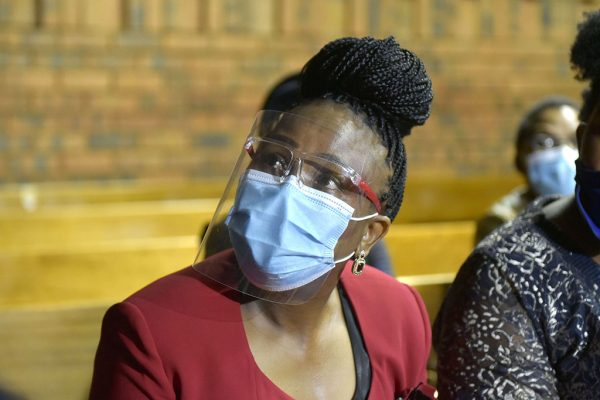 Support for embattled Public Protector Busissiwe Mkhwebane appears to be on the rise among a certain faction of the ruling party as well as the opposition, ahead of the proposed enquiry into her fitness to hold office.

Joining those in support of Mkhwebane on Sunday afternoon was the African Transformation Movement (ATM), who released a statement saying they reject the motion of no confidence in the Public Protector, which was brought by the DA.

In a statement, the ATM based their support of Mkhwebane on her supposedly being “a highly qualified and capable African woman whose competence and passion for transformation has made her enemy number one
for all the racist and corrupt dark forces.”

They cited her office’s clean audit, which was a first for the public protector’s office in 25 years, as well as her office turning around 95% of their caseload within a set turnaround time.

They accused the DA of racism for their failure to support Mkhwebane, and called on parliamentarians not to allow the party to “to use Parliament as part of their forum shopping in their quest to oust an African woman who by all
objective indicators is leading on matters of Governance and helping the poorest of the poor.”

“The DA’s motion is not only dishonest, it is also mired in controversies of whether they were part of the  beneficiaries CR 17 Campaign Funds which Adv Mkhwebane has red-flagged. President Ramaphosa in response to a question in Parliament on how many other MP’s he gave money to, admitted that he had given money to more than the two MP’s whose names are in the public domain. Could it be that the DA is nervous that the unsealing of  the CR17 Bank Statements could expose some of their members? their statement read.

Earlier this week, the EFF’s deputy president Floyd Mbalula also threw his weight behind Mkhwebane, saying she would finish her term as public protector, despite the findings of the review panel.

Meanwhile, ANC secretary-general Ace Magashule coming out in support of Mkhwebane managed to get some of his comrades riled up on Sunday.

Magashule reportedly called on ANC MPs to block the DA’s motion in the National Assembly.

The Sunday Times reported that Magashule said principled ANC MPs would not vote in support of the motion brought by the DA, referring the opposition as “the enemy”

“Officially I can say there is no way the ANC can support the enemy of the revolution, the DA. We can’t vote with the DA on principle matters,” Magashule was quoted as saying.

He claimed the motion was part of an attempt to divide the ANC.

“They are trying their luck. We can see the tactics of trying to divide the ANC … saying they can work with president Ramaphosa. There is only one ANC. Ramaphosa is part of us, he’s part of ANC. The DA must stop its dirty tricks. It will fail in dividing the ANC,” Magashule told the paper.

It would appear though, that some of his comrades disagreed with his statement, as Minister Fikile Mbalula and former minister Derek Hanekom made it know on Twitter.

Ace Magashule is wrong to suggest that mkhwebana cant be removed yes as a friend to mkhwebana he can express that view but not on behalf of th Anc ,Wich structure of anc arrived at such a position? Mkhwebana is been charged with misconduct lets talk about that.

“The enemy”? When did opposition parties in Parliament become our enemies? Rule 2.1 of the ANC Constitution, under Aims and Objectives: To unite ALL the people of South Africa… https://t.co/ue42ha2jDw

Wich nec meeting resolved to defend mkhwebana? SECONDLY the Anc strategy and tactics talks about unity and struggle of the opposite it doesnt characterise the opposition polical parties as the enemy. You where dining with eff leader the other day is he yoyr enemy?

This politics ace magashule espouses on our behalf as our secretary General where does he get them? He is suppose to be chief custodian of anc policy that include its constitution.

Mkhwebane, who was appointed during the presidential term of Jacob Zuma, has long divided opinions within the ANC, and this is just the latest spat involving her.

She is considered by some to be a part of the Zuma/Magashule faction herself, after her rulings against President Cyril Ramaphosa and his CR17 campaign, as well as her supposed whitewashing of the Vrede Dairy report, which saw Magashule and others get of scot-free from allegations of corruption and graft until a court ordered the scrapping of the report.

Mkhwebana is a hired gun not the public protector.

Mkhwebane to face the music soon

The PP’s fate will be decided later this month, when MPs are expected to vote in the National Assembly on establishing the inquiry her fitness to hold office.

This follows the report by a panel, appointed by National Assembly Speaker Thandi Modise last year, following the DA’s motion for Mkhwebane’s removal, after a series of damning court judgements against her, several of which questioned her understanding of the law and her role as public protector.

They found that there was prima facie evidence of incompetence and misconduct against her.

Parliamentary spokesperson Moloto Mothapo said of the panel’s findings: “The rules of the National Assembly stipulate that once the panel has made its recommendations, the speaker must schedule these for decision by the House. If the House decides the inquiry should go ahead, it must be referred to a special section 194 committee for a formal inquiry. The speaker must inform the president of any action or decision coming from the recommendations.”