Trade union federation stages a picket outside the American consulate office in Sandton. 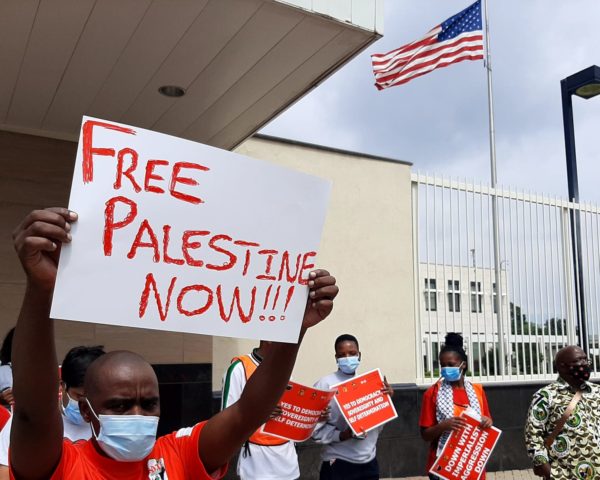 Cosatu members picketing outside the US consulate office in Sandton against the Israeli region in Palestine. Picture: Nigel Sibanda

The Congress of South African Trade Unions (Cosatu) has lashed out at the United States foreign policies in the Israeli and Palestine territories.

On Tuesday a handful of Cosatu members led by the deputy secretary-general of international relations, Zanele Mathebula, staged a picket outside the US consulate office in Sandton.

Mathebula told The Citizen that the aim was to at least bring the message to the attention of the US government.

“We wanted to bring the message to the US government and the US people to support the sovereign state of Palestine,” said Mathebula.

“We want the US to stop aiding and abiding by the apartheid regime of Israel in their quest to cleanse Palestine of the Palestinian people.”

She said that South Africa’s experience of the apartheid regime should force the country into the frontline of those calling for support and galvanising for the people of Palestine.

The fact that Israeli has more than 6 000 children arrested and kept in jails is one of the things that we want the US government to acknowledge as something wrong. We want the US to also support the call to get ICC to investigate Israeli’s crimes against Humanity.”

“We are here to call on the US to support the struggle of the Palestinian people for their rights that have been trampled on by Israeli with the Support of the US.”

Mathebula said that the trade union federation was also aware of health exclusions against jailed Palestinians in Israeli.

“During the Covid pandemic, we have realised that the Israeli government has excluded Palestinians from getting adequate medical care. They have only allowed medical health workers to get vaccines and they are excluding everyone else particularly those ones that are in Israeli jails.”