The DA laid the charges at the Cape Town police station on Wednesday. 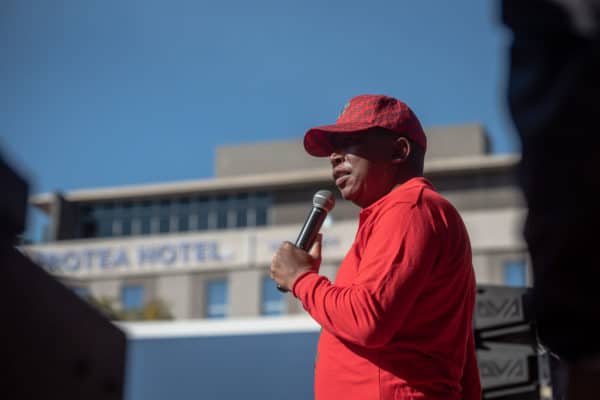 The DA laid the charges at the Cape Town police station on Wednesday.

Speaking in KwaZulu-Natal on Tuesday, DA leader John Steenhuisen said that following their remarks on social media, the four needed to be held accountable for the looting and violence the country has witnessed over the past few days.

Meanwhile, Malema took to social media calling on EFF members to get ready to join the protests following the government’s deployment of the South African National Defence Force (SANDF) in KwaZulu-Natal and Gauteng.

Zuma’s incarceration had triggered widespread riots, notably in KwaZulu-Natal and Gauteng, with the death toll from the riots in both provinces rising to 72, while a total of 1,234 people had been arrested as of Tuesday.

The widespread looting and torching of shops in the provinces has left whole areas without basic groceries.

ActionSA president Herman Mashaba says the party will pursue lawsuits against a number of government officials and the ANC following the looting and protests.

Along with the ruling party, Mashaba said ActionSA will file lawsuits against President Cyril Ramaphosa, Minister of Police Bheki Cele and members of the Justice, Crime Prevention and Security (JCPS) cluster.

“Ramaphosa, Cele and the government had a positive legal obligation to uphold and maintain law and order and that it was their constitutional duty to ensure that they take proactive and reasonable steps to protect and preserve the rule of law,” Mashaba said in a statement.

“A failure or omission to faithfully perform this legal duty must carry consequences as real as those experienced by South Africans who have lost their lives and livelihoods because of the executive’s incompetence and willful inaction.”

Mashaba said they would be helping all South Africans whose properties and businesses had been damaged by the recent violence and looting.

“The legal action we are embarking on will be the first of its kind in democratic South Africa and will seek to finally hold the ruling government to account for its poor governance.

“We believe that there is more than sufficient jurisprudence that merits this a strong test case, and assists us in holding the government to account for its wilful failure to ensure proper law enforcement and the protection of lives, livelihoods and property,” he said.

Mashaba further slammed Ramaphosa and the government for reacting too late to address the violence.

“It was only on Monday, following several days of looting, that the President finally authorised the deployment of the South African National Defence Force – a move that was too little too late.

“Despite numerous opportunities, neither Ramaphosa nor Cele have provided any real reason for their failure to take decisive and preventative action against what is so plainly coordinated criminality,” he said.

ANC using social grants to 'blackmail poor people' to vote for them, claims Zille
9 hours ago
9 hours ago

ANC using social grants to 'blackmail poor people' to vote for them, claims Zille
9 hours ago
9 hours ago