EFF rejects return of Afrikaans at Unisa ‘with contempt’, asks for Swahili instruction

The party has called on Unisa to 'retrace its steps' to 'do away with' the so-called language of the oppressor. 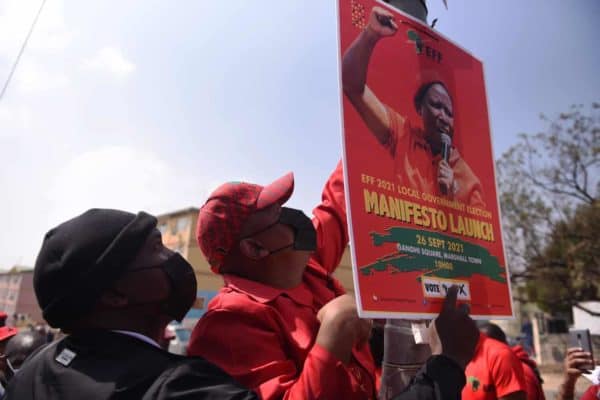 EFF leader Julius Malema puts up posters along Roosevelt Street at Alexandra in Johannesburg, 10 September 2021, during his voter registration drive as the party prepares to launch its election manifesto. Picture: Nigel Sibanda

In a statement on Friday night, the Economic Freedom Fighters weighed in on the recent Constitutional Court decision that Afrikaans should be reinstated at the University of South Africa (Unisa) by 2023 after AfriForum successfully argued for its return.

The judgment comes after the Supreme Court of Appeal ruled in favour of AfriForum with its judgment in 2020 that Unisa’s language policy had not been adopted “in a constitutionally compliant manner”.

The EFF has remained unimpressed, since it says Afrikaans should not be given any special treatment over other African languages, “including Swahili”, as primary languages of academic instruction. They pointed out that the ruling would have implications for a similar decision in 2016 at the University of Pretoria.

They called the “selective choice of Afrikaans as a superior language” a perpetuation of superiority over indigenous languages, and claimed it was insulting to Africans.

The EFF called on Unisa to “do away with the 1976 language of national oppression, racial segregation, exclusion and supremacy” by being more “lawful and precise” in its procedures to do so.

Alana Bailey, AfriForum’s head of cultural affairs, had earlier said the ruling was a huge victory for Afrikaans.

“The right to education in one’s language is a basic human right, but in South Africa it is increasingly ignored, which means everything is becoming more and more English,’ she said.

“Afrikaans is slowly but surely deteriorating and the other nine official languages are not developing fast enough that the right to more native speakers could expand.”

Dr Sipho Sithole, cultural practitioner and research fellow at the Johannesburg Institute for Advanced Study (University of Johannesburg), said every citizen had to be taught in the language that they are fully conversant with, provided that the institution had the competency and the skill to teach in that language.

“I am saying this because there may be South Africans who are only conversant in one language because of their socialisation and upbringing. It will be unfair to then expect them to suddenly receive teaching instruction in
a language they are not familiar with,” Sithole said.

He added that such a decision should be informed by the total student population that opts to receive teaching instruction in their preferred language vis-a-vis the language competency with that university.

The DA has called on the rector and University Council of Unisa to resign following the case of “discrimination” against Afrikaans learning at the institution.

Higher education spokesperson Chantel King said the DA was confident justice would also prevail in Stellenbosch, as it did at Unisa.