Nehawu says no to ANC crowdfunding

The organisation slammed the ruling party for failing to respect workers. 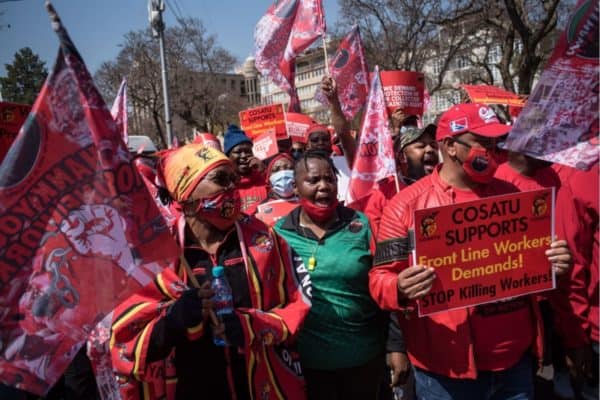 Members of Nehawu protesting outside the Union Buildings in Pretoria on 3 September 2020. Picture for illustration: Jacques Nelles

While ANC employees continue to wait on the ruling party to pay their salaries for July, August and September, crowdfunding is not a favourable option for the National Health, Education and Allied Workers Union (Nehawu).

According to a report in the Sunday World, it was revealed the Congress of South African Trade Unions (Cosatu) affiliated organisation disagreed with crowdfunding being a possible way to pay delayed salaries to ANC workers.

The ANC’s crowdfunding initiative emerged in August, with party spokesperson Pule Mabe saying in a statement this, in addition to increasing membership fees and levies, could help “take over the salary bill”.

However, Nehawu general secretary Zola Saphetha told Sunday World the ANC should have budgeted, at the very least, for staff salaries, and that crowdfunding showed workers were not being respected.

He explained as a ruling party, such policies should be adhered to more than any other parties, and it now risked being the one to reverse “hard-fought gains”.

Where are the millionaires?

Mabe has repeatedly dismissed suggestions that the party was broke, but political analyst Professor Lesiba Teffo told The Citizen in August the ANC was going through a significant financial drought.

“[The ANC] is no longer an attractive option for the investors and tenderpreneurs and many others who thought their fortunes will be enhanced in the ANC.

“There are also others who benefited from the ANC and are faced with all legal challenges and processes because of the way they acquired their wealth, so many people are becoming wary of being associated with the ANC.”

Ironically, the party has produced a plethora of millionaires, billionaires and successful businessmen that could potentially save the party – but they are nowhere to be found.

ALSO READ: ANC to go for candidates with skills and merit, not popularity – Ramaphosa

During the meeting, he appealed to tripartite alliance members to unite, and to avoid any disagreements that could divide society.

This after relationships between the ANC, Cosatu and the South African Communist Party continued to dissolve.

At the start of the Covid-19 pandemic, the three resolved to work together to create a comprehensive response to subsequent social and economic challenges.

However, the pressures of lockdown restrictions and internal divisions exacerbated existing cracks.