The news that Angelo Agrizzi's new book hits the shelves on Friday is probably going to cause a few people sleepless night on Thursday. 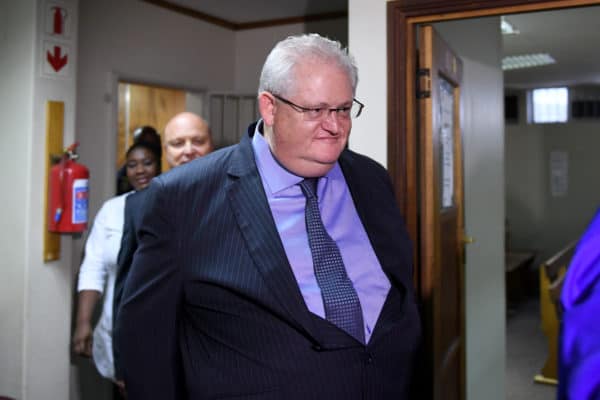 Former Bosasa COO Angelo Agrizzi appears in the trade court in Pretoria on the 1st of February 2019. He appeared with others who were arrested after Agrizzi's statements at the Zondo Commission. (Photo by Gallo Images/ Netwerk 24 / Beeld)

How many beans is Angelo Agrizzi going to spill in his new book, which hits the shelves tomorrow? That news is probably going to cause a few people a sleepless night tonight.

Surviving The Beast – The Ugly Truths About State Capture and Why They Tried to Kill Me, is a sequel to Angelo Agrizzi’s bestseller, Inside the Belly of the Beast – The Real Bosasa Story.

It came out mainly because something strange happened to the whistleblower. They wanted to kill him – he was poisoned but he survived.

His sin was to spill the beans on extensive corporate capture of the state and massive graft at Bosasa before the Commission of Inqurity into State Capture.

It didn’t come as a surprise because he did the unthinkable by touching the untouchable – blowing the whistle on top level corruption involving ANC top guns and their corrupt Bosasa business allies.

Who in South Africa tells an embarrassing story of the theft of state money on an massive scale and still survives? Free State government official and whistleblower Noby Ngombane, businessman and wouldbe whistleblower Ignatius “Igo” Mpambani and many others did not survive.

They were all silenced with a bullet, mostly in broad daylight.

Blowing the whistle on graft is the journey that Agrizzi chose at the risk of his life. Perhaps fearing assassinating him like they did to others, he was poisoned, so that he could die silently.

In bone-chilling detail, Surviving the Beast explores the failings of the state capture commission and why so many big fish still swim free.

Substantiated by irrefutable proof, medical records and key witness statements, Surviving The Beast uncovers what really happens to those who expose the powerful and corrupt.

In his new book, Agrizzi, seen as one of South Africa’s foremost whistleblowers, relates the story or the drama of his near fate when, on 14 October, 2020, he left home at 6am to attend a routine bail court hearing at the Palm Ridge Magistrate’s Court.

He was surprised to be taken to court in an armoured vehicle (Caspir) and escorted by between 10 and 15 blue light vehicles – for his own “protection” as he was told.

In a sinister turn of events, the court denied him bail on the unfounded basis that he posed a flight risk.

His first publisher, on hearing this, inexplicably pulled the book that was expected to come out the same day. And so, as the wheels of (in)justice started turning, the printing press ground to a halt.

Surviving The Beast exposes the involvement of those in the highest echelons of power in dirty tricks, corruption, boardroom assassinations, lies, deceit and cover-ups. There are murders and the swopping of bodies. It is also a compelling memoir of one man’s victory over death.

Agrizzi, a great storyteller, will entertain you with his command of English. He paints a mind picture about the dramatic armed escort drive to the Palm Ridge Magistrate’s Court, then to Sun City prison and, lastly, to hospital.

For a sickly man, the rough ride to court was indeed a harrowing experience and there were times he had to take a deep breath of oxygen from his concentrator.

“My lungs felt like they had taken a beating…” he writes.

“It was as if he [the driver] had been briefed to purposefully drive recklessly to instill fear in me.

“It was as though he had been told to literally shake me up.”

From court he was driven to prison with his own oxygen bottle. While in the filthy, overcrowded cell, he discovered that his oxygen bottle was swopped for a faulty prison issue one of poor quality. He believes this is how he was poisoned.

He was rushed to Chris Hani Baragwanath Academic Hospital in Soweto, where he was in ICU for 52 days.

As he went through this experience, Agrizzi was reminded of a threat made directly against him during a Bosasa meeting in 2017.

Two Bosasa officials said they told a particular lawyer to “tell Angelo not to mess with us.

Things can happen – prisoners can be used, cells are opened up…”