Russia-Ukraine: SACP backs Putin standing up ‘against US imperialism’

The SACP condemned the sanctions imposed on Russia by the US and EU, saying they were 'an evil instrument'. 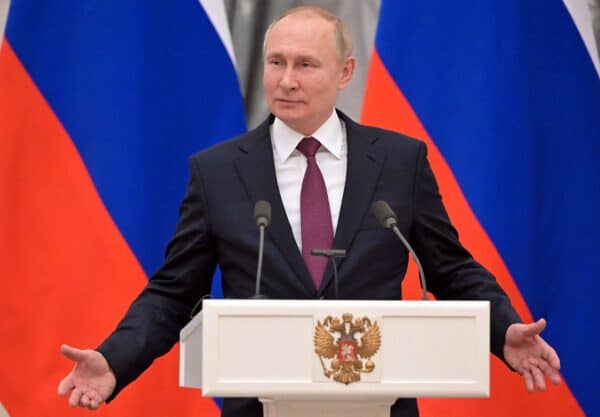 While the SACP said it did not support war and the killing of innocent civilians, the party’s first deputy secretary-general, Solly Mapaila, said Putin was standing up against “the big boys of the US and European Union who are intimidating the whole world”.

Putin’s decision to send troops into Ukraine on Thursday sent shockwaves throughout the world, with swift sanctions being imposed by the US and the EU against Russia over its invasion of the former Soviet state.

Mapaila said the condemnation of Russia was unjustified because the US and its allies were sponsoring wars in Syria and the Middle East, including other parts of the world, with impunity.

He said Russia was standing up against US imperialism, and this is a cause for celebration and not the invasion of Ukraine.

“Although an impression is created that Russia is the aggressor, in this case, the aggressor is US imperialism that has aggressively tried to encircle Russia, and Russia has to defend itself,” Mapaila said in an interview with Newzroom Afrika.

The SACP leader claimed the EU working with the North Atlantic Treaty Organisation (Nato) had disregarded peace accords that led to the dissolution of the Soviet Union.

He said Putin was merely defending the Russian Federation from the West’s attempts to “finish it off”, especially given moves by Ukrainian President Volodymyr Zelenskyy to join Nato.

“They are now encircling Russia to finish it off, particularly from its defence mechanism… Nato never disintegrated, it exists and continues to be an aggressive force,” Mapaila said.

“We fully understand why Russia had to protect its own defence. It’s the same as, for instance, allowing the US to come and build its military power inside Lesotho, which is a landlocked country in South Africa, when we know that it’s not a friendly force to us.

“That is exactly what is happening there in Ukraine and Russia will be foolhardy to accept such a move by the US,” he added.

Mapaila said in the recent past they had cautioned Nato secretary-general Jens Stoltenberg of the organisation’s aggression against Russia and China, particularly on tensions over the South China Sea and Taiwan.

“We appreciate and know what is peace and unjust peace, what is war and unjust war.

“And in this case, we know that Russia’s intention is to defend its own sovereignty and integrity, and not to be surrounded by air defence missiles from Nato and the USA.”

Mapaila said condemned the sanctions imposed on Russia by US President Joe Biden and the EU, saying they were “an evil instrument”.

“The use of international instruments of finance it’s an evil instrument that is used by the imperialist forces, instead of allowing that instrument to be used for world development,” he said.

He said the sanctions against Russia were no different from sanctions imposed by the West on socialist countries such as Cuba and Venezuela.

“When it suits them they cut off countries… today Venezuela and Cuba cannot transact on the international system.”

Mapaila said the sanctions against Russia were an opportunity for the country to cut itself from the West.

“Perhaps it’s a welcomed move and Russia will then see the need, given its technological advances, to develop capacity working with other countries like China and others to create alternatives, because this unitarism of the US and European imperialism, that is imposed on the world, must actually come to an end.”