The president's visit appears to be a sign that the president either missed Mashaba's request or turned it down. 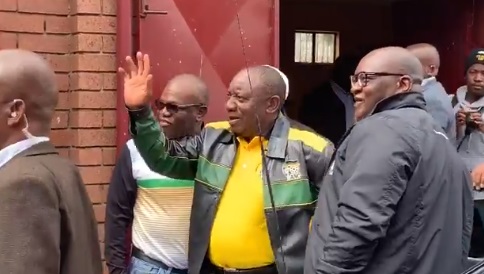 President Cyril Ramaphosa has arrived in Alexandra, north of Johannesburg, amidst protest action from disgruntled locals. The president arrived to a warm reception in the tense township, which saw roads blockaded with burning tires last week.

Ramaphosa got out of his vehicle wearing ANC regalia, which may indicate that he was in the township in his capacity as ANC president.

He was in the township to galvanise support for the party and to attend to locals’ desperate questions regarding service delivery issues.

His Alexandra visit will see him go door-to-door from the West Bank area to 12th Avenue. He will then have a community meeting at the Alexandra stadiums’ parking lot, to possibly answer questions on a way forward following more than a week of protests.

Economic Freedom Fighter national chair advocate Dali Mpofu made an observation and highlighted that it was interesting to see the president respond to the riots in Alex.

In a tweet, he suggested that the ANC was behind the Alexandra protests.

“If u had any doubts about the agenda behind the Alexandra protest… All questions should be answered by Ramaphosa’s decision to visit Alex, not, as president of South Africa, but as ANC president. Only desperation can cause him to use the genuine grievances of the people for electioneering.”

Only desperation can cause him to use the genuine grievances of the people for electioneering!????????

Mpofu’s opinion comes after Malema said it was clear that the Alexandra protests were the brainchild of the ANC. Speaking at a press briefing in Braamfontein on Wednesday, Malema told journalists that while the demands of the locals were valid, he firmly believed they were the creation of the ANC.

“It’s a campaign strategy which is going to backfire big time on the ANC. Let them go on instigating, but they must know it will spread to the municipalities they are in.”

He said Johannesburg mayor Herman Mashaba should have attended to the protests to receive the memorandum from locals the minute he heard about the protests.

In usual Malema-style, the charismatic leader tabled a prediction regarding Ramaphosa. He predicted that Ramaphosa would not finish his term and deputy president David Mabuza would replace him to run the country post elections.

Meanwhile, Mashaba is set to have an interesting visit to Alex on Monday, April 15, as a letter he had sent to Ramaphosa on visiting the township as a collective, appears to have been ignored.

Mashaba said Ramaphosa’s silence regarding a letter sent to him on Monday revealed “the politics behind the Alexandra protest”, he wrote in a statement on Thursday.

Mashaba proposed that instead of Ramaphosa visiting Alex residents on Thursday, that he consider organising a “real inter-governmental engagement” with residents at a later date.

Enraged residents have been protesting since last Wednesday, calling for solutions to service delivery problems, high levels of crime, and the issue of illegal land use, among others.