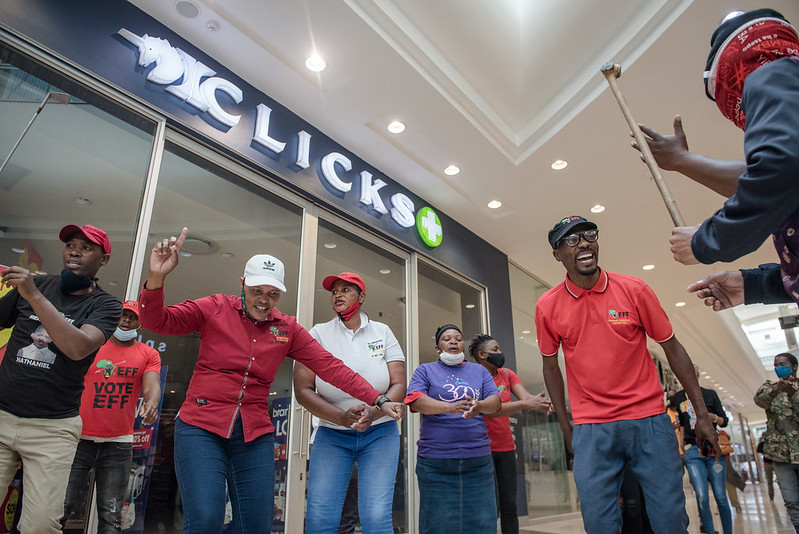 Members of the EFF protest outside the Clicks store in Mall of Africa, 7 September 2020, Midrand. The party has called for a total shutdown of all Clicks stores after a racist advert was shared on social media. Picture: Jacques Nelles

Watch an interview with the EFF’s Floyd Shivambu in the video above.

The streets of social media have weighed in with their opinions as the Economic Freedom Fighters (EFF) members caused havoc across multiple Clicks stores in the country on Monday, demanding that the retail company shut down following its controversial “racist advert”.

The EFF has been calling on Clicks to shut down its stores voluntarily after an advert posted on their website described two black women’s hair as, “dry and damaged” and “frizzy and dull”, while white women’s hair was labelled as “fine and flat hair” and “normal hair”.

Various Clicks store have been damaged by the party’s members with the branch at Lemon Tree Mall in Alberton set alight, while another branch at Highveld Mall in Emalahleni was petrol-bombed.

It was also reported that a Clicks store at the Cycad shopping centre in Polokwane has been petrol-bombed.

EFF leader Julius Malema was seen in video footage closing a Clicks store at the Thornhill shopping centre in Polokwane amid the protests.

Meanwhile on Twitter, One South Africa Movement (Osa) leader Mmusi Maimane has called on South Africans “to rethink and to reimagine how we resolve conflicts and build the South Africa we all deserve” amid the protests.

I am tired of the old dance in the political space. We need to rethink, to reimagine how we resolve conflicts and build the South Africa we all deserve.

Maimane further gave out suggestions on how Clicks should resolve the matter.

My recommendation for @Clicks_SA is this.

Former public protector Thuli Madonsela also weighed in on the matter, saying anarchy and violence undermined the cause of fighting injustice.

“In my view, the Clicks case #BlackHairMatter, is a textbook case of unconscious bias. Calling it out is great but anarchy and violence undermine the cause.

“The best and most cerebral response I’ve seen so far is a video by young black women, among them my colleague Diane Gahiza,” she said.

The tweet prompted a response from EFF MP Mbuyiseni Ndlozi: “Thuli…Perhaps the real unconscious is your desperate secret desire for white approval and acceptance. We are so sorry for embarrassing you to your in-laws.

“For all the stress of having to explain to them what our embarrassing actions mean. We are like that…never cerebral!” he said.

We are so sorry for embarrassing you to your in-laws. For all the stress of having to explain to them what our embarrassing actions mean. We are like that: never cerebral! https://t.co/E5Haa6uBFa

EFF deputy president Floyd Shivambu said the party was not afraid of a “court order or any intimidation” from Clicks and further said the retailer should lose profits as result of the actions.

“So we came here to close Clicks because their a racist company, there are certain demands that where given to them to say that they must disclose the names of the people who where involved in commissioning that racist advert.

“They must disclose the name of the company that did the advert and also show evident that they have taken action against everyone that is involved.

“There is not any form of court order or any intimidation that is going to stop us from protesting against racism.

“That is why we are here today to say no to racism and that Clicks must fall until they comply to all the demands that we have given them,” he said.

READ MORE: Clicks faces EFF’s wrath, but brand damage could be even worse

Shivambu added that Clicks should not be allowed to continue trading as if nothing happened.

“They must lose profits because of their racism,” he said.

“They are actually very lucky that we had the planned protest which we announced before we came. They should ask what happened to H&M when we took action against them for racism. There were a lot of consequences,” he said.

I love how you guys immediately assumed the EFF protest would be violent and went as far as calling them hooligans. Not so long ago you were cheering for Black Lives Matter protests though. I love these double standards. Keep them up.

So it was fine for the EFFs pal, Herman Mashaba, to build an empire on nourishing black hair products but when Clicks offers one such product, the EFF is prepared to die in its efforts to shut down the company in the name of black dignity. ????????‍♂️

Clicks will get their interdict this morning, if the haven’t got it already. It won’t stop the riot but it will ensure that the CIC and his party pay a heavy, heavy price. If things go the way the EFF plan, it could bankrupt the party and see its leaders in jail.

I don’t agree with the EFF on many principles but to everyone saying “This is what the EFF should be doing” what’s stopping you from doing all those things yourselves?

The EFF can’t fight every battle, they are a young party with limited resources. #Clicks

READ NEXT: South Africans show off their natural crowns in rallying cry against offensive Clicks advert