‘Zuma’s supporters must accept he is behind bars’ – DA

Protesters have brought parts of the KZN province to a standstill, blocking a number of roads. 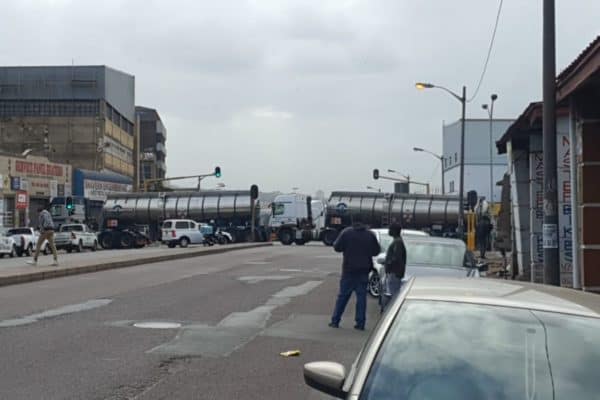 A number of roads in KwaZulu-Natal have been blocked. Picture: Twitter / @TrafficSA

With protests in KwaZulu-Natal intensifying, the DA has called Premier Sihle Zikalala and ANC leadership in the province to intervene.

Protesters have brought various parts of the province to a standstill, blocking roads with burning tyres, cars and trucks.

So far, 13 protesters have been arrested in Empangeni having hijacked trucks and forcing the drivers to block roads before fleeing with the keys, according to News24.

ALSO READ: Zuma arrest: Msholozi could be home before Christmas

It is understood the protests are a result of former president Jacob Zuma’s 15 incarceration at the Estcourt Correctional Centre, and that his supporters are demanding he be released.

Posters have been circulating on social media, one of which was shared by the former president’s daughter, Dudu Zuma-Sambudla, which says “Shutdown KZN” in support of Zuma.

This is in contrast to the South African Police Service (Saps) statements, which have denied reports the protesters are Zuma supporters.

‘ANC has created a monster’

The DA has since strongly condemned the protest action, calling on Zikala to act and the ANC to intervene.

“It cannot be that internal ANC factions undermine the rule of law, infringing on the rights of law-abiding citizens of KZN. Clearly, the ANC has created a monster, which if not controlled, will negatively affect our economy and most importantly lead to job losses,” the DA said in a statement.

“This is an ANC problem – not a political problem. Both the Premier and chairperson of the ANC, Sihle Zikalala, and the mayor of eThekwini, Thomas Kaunda, among others, recently publicly displayed their support for Jacob Zuma.

“This leads to the question; will they now have the political will to deal with these illegal protests? They are clearly caught between a rock and a hard place. It’s time to put the province ahead of the ANC’s factions.”

‘Zuma’s supporters must accept he is behind bars’

The DA said the police acted quickly when Carl Niehaus was arrested on Thursday for an illegal gathering, but they appear to be non-existent and unable to maintain order in the current protests.

“The DA calls on the Premier and the ANC leadership in KZN to condemn the pro-Zuma protests and ensure that members of the ANC are called to order.

READ MORE: Cele: People who violated lockdown laws in Nkandla will be arrested

“The DA further calls on SAPS to ensure that law and order are maintained without fear or favour and without any politicisation. Nobody is above the law.

“Jacob Zuma is now behind bars. His supporters need to accept this and cease infringing on the rights of the people of KZN. If not, they must face the full might of the law.”

Last week, there was an uproar over the gatherings at Zuma’s Nkandla homestead, which many say defied the adjusted Level 4 lockdown regulations while the police who were present did nothing.

This is amid the sharp rise of Covid-19 infections driven by the new Delta variant.

Zuma's corruption case to be heard today, in his absence
2 hours ago
2 hours ago

Elections: Candidate nomination closes today – Will the ANC be ready?
2 hours ago
2 hours ago

ANC to go for candidates with skills and merit, not popularity - Ramaphosa
3 hours ago
3 hours ago
PREMIUM!

Zuma's corruption case to be heard today, in his absence
2 hours ago
2 hours ago

Elections: Candidate nomination closes today – Will the ANC be ready?
2 hours ago
2 hours ago

ANC to go for candidates with skills and merit, not popularity - Ramaphosa
3 hours ago
3 hours ago
PREMIUM!