A relatively negligible crowd of protesters gathered at the union federation's main protest in the Johannesburg CBD. 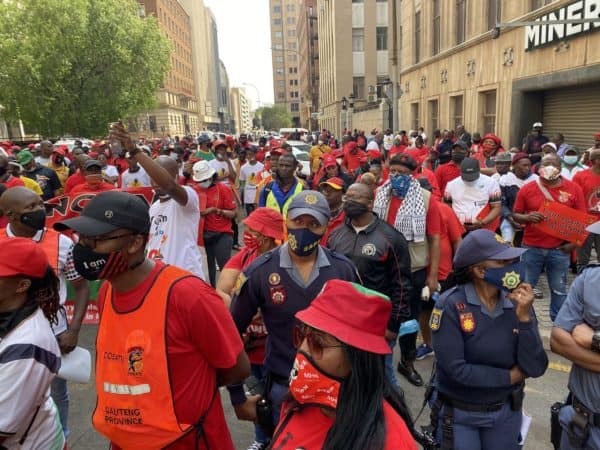 Cosatu on Thursday said it was happy about the turnout of its members and supporters who took part in its national socio-economic strike, despite restrictions on gatherings due to Covid-19.

The one-day strike action was aimed at – among other issues – putting pressure on government and the private sector to address corruption, unemployment, retrenchments and what Cosatu calls an “attack on collective bargaining agreements”.

Compared to Cosatu’s previous marches that often included thousands of demonstrators, a relatively negligible crowd of protesters gathered at the federation’s main protest in the Johannesburg CBD.

The group was joined by leaders of the ANC’s alliance partners, the South African Communist Party (SACP) and the South African National Civic Organisation (Sanco), as they marched to the office of Gauteng Premier David Makhura and the Minerals Council South Africa to hand over their memorandum of demands.

Cosatu’s second deputy president Louise Thipe said they did not have the typical number of demonstrators due to the limit on gatherings.

Under the current coronavirus level 1 lockdown regulations, only 2,000 people are permitted to gather outside and 750 persons for indoor venues.

Although Thipe did not indicate how many people had gathered at Mary Fitzgerald Square in Newtown, she said they were happy with the turnout.

“We are very happy with the turnout and as we indicated, we are observing the [Covid] protocols and we could not expect thousands as it used to be in the past. But for now, we are happy and the message will be delivered,” she told SABC News.

She said other Cosatu leaders were leading protests in other provinces at more than 28 venues in major cities and towns.

“It has gone very well and in fact, others started yesterday [Wednesday] with the motorcade and things are going well in all provinces,” Thipe said.

In Cape Town, another group of Cosatu members gathered at the offices of the City of Cape Town to hand over their memorandum of demands.

Among their list of demands, they want the city to scrap labour brokers and insource workers as well as attend to their concerns about the Expanded Public Works Programme (EPWP).

“Our message that we wanted to bring across today is that we want decent work with decent pay, and we want social justice and gender-based justice because we don’t have safe workplaces,” Oosthysen told eNCA.

READ NEXT: Cosatu ‘deeply bothered’ by fuel and electricity hikes

Cosatu calls for reconstruction of SA economy to address unemployment
4 days ago
4 days ago
PREMIUM!

Cosatu calls for reconstruction of SA economy to address unemployment
4 days ago
4 days ago
PREMIUM!