The former Denel CEO says Tony Gupta asked him why he would not take money because everybody did. 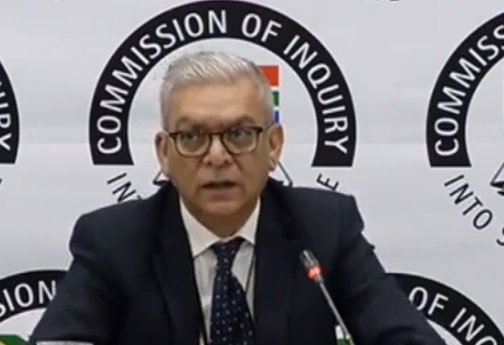 Former group chief executive officer of the state-owned enterprise (SOE) Denel, Riaz Saloojee, on Wednesday told the commission of inquiry into state capture that after consistent attempts, he met one of the Gupta brothers and their business associate Salim Essa for a third time.

Saloojee told the commission that the third meeting was in the latter part of 2012 after two other meetings with the controversial Gupta family alleged to be at the centre of state capture.

At the first meeting, Saloojee met Tony Rajesh and Atul Gupta as well as the minister of public enterprises at the time, Malusi Gigaba.

All these meetings took place at the Gupta residence in Saxonwold, Saloojee told the commission.

Saloojee said at the second meeting it became clear to him that the Guptas wanted to enter the defence environment and use Denel as a vehicle to do so.

However, he added that he indicated to those present at that meeting that if business was to be done with Denel, proper processes would have to be followed.

However, Saloojee said in his own view he did not think the Guptas or Essa wanted to take the issue of following proper processes further as it was never discussed.

The third meeting, which took part in the latter part of 2012, was only attended by Tony Gupta and Essa, Saloojee said, adding that when he arrived at the Gupta residence the “atmosphere was quite tense”.

The chairperson of the commission, Deputy Chief Justice Raymond Zondo, asked Saloojee to give his understanding of what Gupta meant when he said he would elevate his concerns.

Saloojee told the commission that his understanding was that Gupta would either approach Gigaba or Zuma.

“Chair, if an individual makes a comment like that, there is only one interpretation. It is obviously a threat to elevate it somewhere else,” Saloojee told the commission.

In the third meeting, Tony Gupta told Saloojee that the family was working extremely hard to lift Denel’s blacklisting in India and would wield its influence in that part of the world.

In 2005, Denel was blacklisted from doing business in India over alleged corruption, however, the ban was years later lifted after no evidence of such could be found.

Saloojee said “there was no way” he would entertain Gupta’s comments because South Africa was following its own judicial, legal processes.

Gupta also told Saloojee that Denel was one of the few SOEs that was not supporting the New Age newspaper with subscriptions or advertising.

Saloojee’s response to this was that Denel was financially constrained and could not spend money on “things that would not bring value to the business”.

Walking out of the Gupta residence at the end of the meeting, with Essa walking in front and Gupta besides Saloojee, the Gupta brother asked the former Denel CEO why he did not take money “because everybody takes money”.

Saloojee said his response was that he did not take money, adding that though he was shocked by the blatant offer, he was also not shocked because of previous interactions with the family and media reports.