The director says he appeared before the commission to clear BNP Capital's name and that he now realises the company was used as a scapegoat. 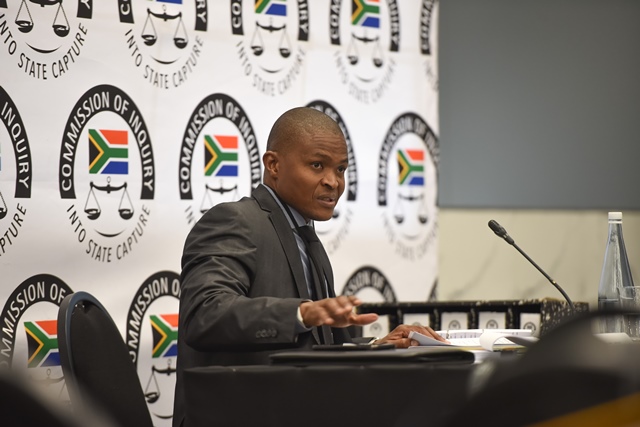 BNP Capital Director Daniel Mahlangu is pictured at the Commission of Inquiry into State Capture in Johannesburg, 27 June 2019, where he gave evidence relating to SAA. Picture: Refilwe Modise

Daniel Mahlangu, the director of BNP Capital, which scored a multimillion-rand tender with South African Airways (SAA) in 2016 – which was later cancelled, on Friday concluded his two-day testimony at the commission of inquiry into state capture chaired by Deputy Chief Justice Raymond Zondo.

In conclusion, evidence leader at the commission senior counsel Kate Hofmeyr put a number of propositions to Mahlangu for comment.

Hofmeyr put it to Mahlangu that BNP Capital had agreed not to reveal that former SAA board chair Dudu Myeni’s “personal adviser”, Masotsha Mngadi, had been involved in the bid for transaction advisory services with SAA.

According to testimony heard at the commission on Thursday and Friday, Mngadi had requested that his name should be removed from bid documents that were submitted to SAA and that he should not be referenced.

“That’s incorrect,” Mahlangu responded, explaining that BNP Capital had not taken a “conscious decision” to remove Mngadi’s name from the bid documents.

“The true facts are [that] Mr Mngadi at the eleventh hour, he withdrew his details in the bid document and it’s not like its BNP Capital’s doing,” Mahlangu added.

The commission heard earlier that Mngadi had emailed Ivan Moyo of BNP Capital on February 13, 2016, requesting that his name should be replaced on the bid document by that of Brandon King, to which Moyo complied. King would be the representative of Mngadi’s entity, Inline Trading 10, which had partnered with BNP Capital to bid for the tender at the national airline.

Mahlangu earlier told the commission that he only came to know of this email two weeks ago in preparation for his appearance at the inquiry.

Mahlangu rejected Hofmeyr’s second proposition that BNP Capital’s bid for the tender did not comply with the terms of the tender and the company should not have been awarded the contract.

Mahlangu responded: “I don’t agree … as far as the JV or the consortium is concerned … ours was not incorporated, it was a loose consortium where [there was] a lead bidder, which was us, and Inline Trading was just a sub-contractor.

“So, as far as the requirements are concerned, you cannot have a consolidated B-BBEE certificate for a consortium as such.

Hofmeyr also proposed that Mahlangu did not check the factual accuracy of the letters that Mngadi had drafted and he, Mahlangu, signed off. The commission heard on Thursday that these letters would be on the letterhead of BNP Capital.

“Some, not all of them,” Mhlangu responded, adding that since Mngadi was the point of contact with SAA and other parties, such as Grissag, which would provide funding for SAA through BNP Capital, he took some of the information from Mngadi as “the gospel truth”.

Mahlangu agreed to Hofmeyr’s fourth proposition that BNP Capital had no record of having sent SAA a letter which dealt with the suspension of the company’s Financial Service’s Board (FSB) licence in 2016.

The commission heard earlier that former SAA chief financial officer (CFO) Phumeza Nhantsi had contacted BNP Capital to inform the entity that SAA had not received a letter the company had claimed it sent on May 13, 2016, in which it explained the steps it would take to address the suspension of the licence to avoid losing the contract with the airline. Nhantsi had requested proof that the letter was sent, which was not forthcoming.

Hofmeyr’s fifth proposition was that Mahlangu had motivated for a cancellation fee from SAA on the basis of facts that he had not verified and did not have personal knowledge of.

Mahlangu said his partners may have verified that information, conceding that he took the facts from Mngadi and assumed them to be true.

In conclusion, Mahlangu said he appeared before the commission in a bid to clear BNP Capital’s name, adding that in hindsight, he realised that there were “bigger protagonists at play” regarding the deal and that his company was used as a scapegoat.