Ex-protocol boss admits to ‘name-dropping’ after his memory ‘refreshed’

Bruce Koloane says he erred in using the names of the ministers and Zuma to exert pressure on officials. 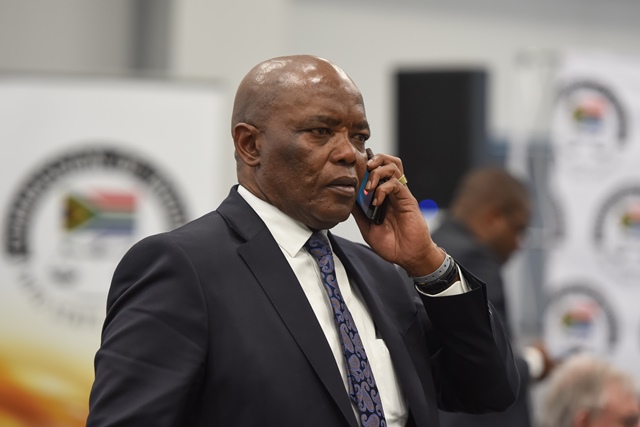 The former head of state protocol, Ambassador Bruce Koloane, on Tuesday admitted at the commission of inquiry into state capture that he “erred” in “name-dropping” the names of ministers and former president Jacob Zuma to exert influence on officials to expedite the application process for a flight clearance for an aircraft carrying guests to a Gupta wedding to land at the Waterkloof Air Force Base in 2013.

During questioning on Monday, Koloane said he did not recall “dropping the names” of former transport minister Ben Martins, or minister of defence and military veterans Nosiviwe Mapisa-Nqakula and Zuma in order to pressure officials to facilitate the landing.

The commission, chaired by Deputy Chief Justice Raymond Zondo, adjourned on Monday to allow Koloane to listen to telephone recordings, where he “dropped” these names.

On Tuesday, he thanked the commission for the opportunity to listen to the recordings, which he said had helped refresh his memory.

The recording is of the telephone call Koloane made to Major Thabo Ntshisi, who was a warrant officer at the time, to inquire about the progress with a clearance request from the Indian High Commission to land the aircraft at the air force base.

Koloane admitted that he did mention that four to five ministers from India would be onboard the plane. This was in response to the ambassador being told that the air force base could only receive flights transporting heads of state and their deputies.

He further admitted that he had said that Martins had been instructed by Zuma to assist the Gupta family with the landing and that Mapisa-Nqakula had no objections to the landing. He also admitted that at a meeting between himself, Martins, and airports company South African (Acsa) CEO Bongani Maseko, he said he been asked to assist the Guptas because this was a “unique case”.

“I would like to admit that indeed I did what has now become popularly known as name-dropping and used those sentences merely to push the officials who were supposed to process the flight clearance to do their job, to do the processing and I also want to go on record … that that was fundamentally nothing but name-dropping,” Koloane told the commission.

These ministers and Zuma “did not at any stage communicate with me that I should in any way deal with this matter”, Koloane told the commission.

He told the commission that he took full responsibility for this fault, adding that he sought to exert pressure on officials “to expedite” the processing of the application for flight clearance to land at the air force base.

On Monday, the ambassador had also said that he did not recall whether a “pre-check” was conducted at the air force base before the flight clearance had been approved, a matter which he admitted had transpired after having the opportunity to listen to the recordings.

He told the commission that he had used the phrase to describe the landing as a “unique case” because in the history of the country, not one family had requested to land an aeroplane with so many passengers onboard either at OR Tambo International Airport or at Waterkloof Air Force Base.

Koloane admitted that he had mentioned that the application to land the plane was for the Gupta family.

“I fully concur with the statement that … the president or the presidency has never ever … interfered with the administrative process of facilitating the landing of aeroplanes nor has it ever interfered in any protocol-related activities,” Koloane told the commission.

Koloane added: “So, therefore, chair, I would like to again repeat that, by my own admission, that I erred, it was an error of judgement, in … wrongly and wrongfully using the names of the then minister of transport, Mr Ben Martins, the current minister of defence, as well as the presidency.”