The former president also alleges Johann Rupert interfered with the rand after Gordhan was sacked as a minister. 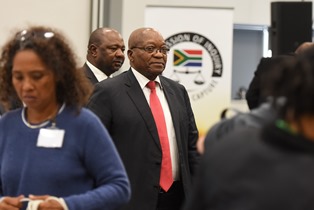 Zuma said Ramathlodi was recruited while he was a student in Lesotho, adding that the allegations the former minister made against him when testifying at the commission were part of a ploy to have the former president “removed”.

The former president told the commission that the narrative that he is corrupt is part of a plan to “character assassinate” him because in the early 90s he came across information about spies within the ANC.

Zuma said he has a list of those who are spies within the governing party.

Some of these spies have given authors information to write books about him, Zuma told the commission.

The former president also told the chairperson of the commission of inquiry into state capture, Deputy Chief Justice Raymond Zondo, of businessman Johann Rupert’s alleged threat to interfere with the rand if Pravin Gordhan was sacked as a minister.

Gordhan is now minister of public enterprises. Zuma fired him in 2017 along with his then deputy, Mcebisi Jonas. Gordhan was replaced by Malusi Gigaba.

Zuma said he heard of this threat from the current minister of transport, Fikile Mbalula, who had attended a certain event at one of Rupert’s farms.

The former president said Mbalula told him that at this event Rupert had told the minister, who served in the sports portfolio at the time, that he informed Zuma that should he remove Gordhan they – Rupert and others – “would shut down the economy” and interfere with the rand.

“Indeed they did interfere with the rand,” Zuma said, adding that one person this year admitted to this.

The former president also told the commission about alleged attempts on his life.