Smith has been implicated in the evidence of Angelo Agrizzi, who testified in 2019. 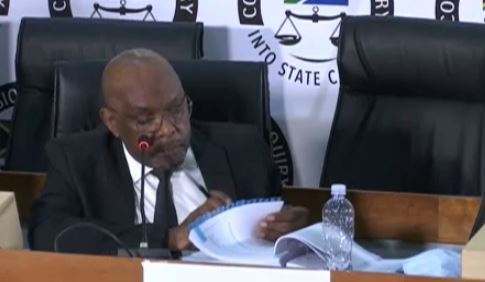 In 2019, Agrizzi told the commission that former Bosasa CEO Gavin Watson was paying bribes per month to the portfolio committee members on correctional services, including Smith, to avoid questions about Bosasa’s contracts with government at the time.

Bosasa had a multimillion-rand contract with the department of justice, constitutional development and correctional services for the implementation of access control and surveillance equipment at various courts across the country.

However, Bosasa managed to avoid the negative media scrutiny over the company’s tenders after the Special Investigating Unit (SIU) started investigating.

With advocate Viwe Notshe leading questioning during his testimony, Smith admitted to meeting officials from Bosasa in 2009 while the SIU investigations were ongoing and said the meetings were held by former National Assembly House Chairperson of Committees, Cedric Florick.

Smith told the commission he did not recall whether he met with the Bosasa officials [Agrizzi and former chairperson Gibson Njenje] for the first time before or after the SIU’s investigation report had been submitted in parliament.

“I’m not sure when we met them, but chances are, we met them before the report was submitted. My recollection is that most stakeholders wanted to meet or introduce themselves to the chair as soon as possible after.

“I think I was elected as the chairperson around about July. If these minutes [of the meeting] are in October, it will probably be after the initial attempt to meet with me,” he said.

Although Smith admitted he did ask for a personal loan from Agrizzi, he denied receiving monthly payments from Bosasa.

“In terms of the loan, I had bought shares in Euro Blitz so I told Mr Agrizzi that when the shares mature, I was going to pay him back as I needed to pay school fees at the time. We had discussed the loans in an email in which I requested assistance,” he said.

When asked how Agrizzi knew that there would be no problem with payments, Smith said that he had had an agreement with Euro Blitz and that he received the correspondence in 2015 from the company regarding his shares.