Zondo commission to ask ConCourt to jail Zuma for contempt

This follows a letter from Zuma’s lawyers that their client will not be appearing before the commission as compelled by a Constitutional Court order in January. 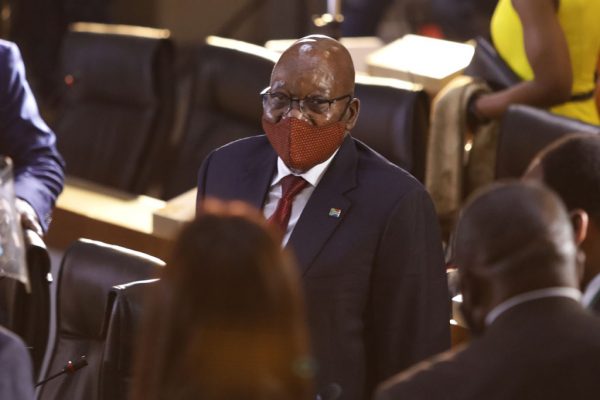 Former president Jacob Zuma arrives at the Commission of Inquiry into Allegations of State Capture in Johannesburg, on 16 November 2020. Picture: Guillem Sartorio/AFP

Deputy Chief Justice Raymond Zondo on Monday said the Commission of Inquiry into State Capture would make an application to the Constitutional Court (ConCourt) seeking an order declaring that former president Jacob Zuma is guilty of contempt of court.

“The commission will approach the Constitutional Court and ask it to impose a term of imprisonment on Mr Zuma if it finds that he is guilty of contempt of court. It will be up to the court what it considers appropriate,” Zondo said.

He said Zuma would be given an opportunity to oppose the application by the commission.

This followed a letter from Zuma’s lawyers to the commission stating that their client will not be appearing before the commission as compiled by a Constitutional Court order in January.

The letter, dated 15 February 2021, said Zuma would not appear as scheduled this week due to his application at the Pretoria High Court challenging Zondo’s decision in November 2020 not to recuse himself from hearing Zuma’s testimony.

Justice Zondo said the ConCourt could either impose a term of imprisonment on Zuma or a fine, but that the commission would be seeking imprisonment.

DCJ says the commission will approach the constitutional court to impose a term of imprisonment for Mr. Zuma. #StateCaptureInquiry

The former president’s lawyers also argued that the commission’s summons issued for their client’s appearance was irregular and not in line with the ConCourt judgement on 28 January 2021.

Justice Zondo dismissed the reasons given by the lawyers saying the summons issued for Zuma’s appearance was valid and the ConCourt knew of his review application in the high court.

“He and his lawyers knew that this was one of the points that were being made by the commission before the Constitutional Court,” he said.

‘We are all equal before the law’

Meanwhile, Zondo said because Zuma had left the inquiry on 19 November 2020 without permission from him, the commission decided to lodge the ConCourt application because they feared he might not return to answer questions put to him.

The chairperson said Zuma had an opportunity to challenge the commission’s application in the ConCourt, but he chose not to.

He said the commission viewed Zuma’s conduct in a very serious light because this was not the first time he disobeyed it.

“Mr Zuma had a full opportunity to put whatever reasons he believed justified him in not complying with the summons and allowed the Constitutional Court to decide on those reasons,” Zondo said.

Zondo said it was a pity that Zuma chose not to adhere to the ConCourt’s ruling, especially given that he is a former head of state.

“This is very serious because if it is allowed to prevail, there will be lawlessness and chaos in the courts,” he said. “Our Constitution tells us that we are all equal before the law.”

Watch the proceedings below, courtesy of SABC News.