The SSA budget increased exponentially after Mahlobo was appointed minister. 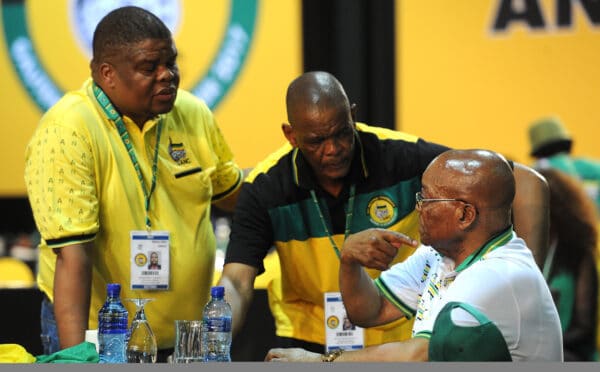 The state capture commission has recommended that former state intelligence minister David Mahlobo, ex-spy boss Arthur Fraser, and others be investigated for alleged illegal operations at the State Security Agency (SSA), including the millions of Rands looted from the agency.

Commission chairperson, Chief Justice Raymond Zondo delivered the much anticipated final instalment of the state capture investigation to President Cyril Ramaphosa on Wednesday night. The handover was delayed for hours, sending South Africans to speculate on the reasons behind the delays behind the final state capture report.

Evidence before the commission found that at least R1.5 billion was unaccounted for between 2012 and 2018 at the SSA. At one point, witnesses testified to the delivery of R4.51m million every month to Mahlobo, which was counted before them.

Also Read: Jacob Zuma and Arthur Fraser worked to keep each other out of prison – Zondo

Mahlobo, said Zondo, handled large sums of cash having involved himself and directed operational matters at the SSA. The monies were never accounted for.

“Since Mr Mahlobo denied having received cash as testified by a number of witnesses, it means that, if it were to be established in court that large sums of cash were handed to Mahlobo, it would mean that he stole the money.”

SSA ‘a law unto itself’

There was evidence that illegal operations took place at the SSA, with cash withdrawn at the insistence of axed former “top spy” and ex-ambassador to Japan, Thulani Dlomo, and used to transport, accommodate and feed military veterans at the ANC’ s birthday celebrations in Rustenburg, North West in 2016.

The agency also rendered funding at the 2017 ANC elective conference at Nasrec, and in the Western Cape, Northern Cape and Eastern Cape to “improve the party’s fortunes” among coloured communities.

“The Special Operations Unit at the SSA, particularly under the direction of Dlomo, was law unto itself, launching many projects that operated illegally.

“Not only where the activities against the Constitution, but there is a strong indication that some of them contravened legislation governing intelligence services,” read the report.

The commission found that the SSA budget increased “hugely” after Mahlobo’s appointment.

The abuse of the secrecy surrounding SSA operations, abuse of the vetting system and irregular appointments involving the former ministers at both SSA and police crime intelligence were red flagged by Zondo.

Dlomo was found to have established a parallel vetting system for agents by recruiting someone from outside the SSA to do the job, leading to a flawed process.

According to the report, some of those recruited by the ministers at the time could have been involved in the state capture project, as they may have been recruited to achieve “political or bipartisan” objectives.

The report recommended that Dlomo be investigated for his alleged abuse of recruitment and the vetting system, which it found was not done to benefit the agency, but a few individuals.

Zondo found that Parliament’s committee on state security failed to act on reports submitted to it by the intelligence director-general, which set out the abuse of monies, power, systems, including procurement of a “grabber” by police intelligence that was to be used to sway favours at the Nasrec conference.

“The committee was briefed for two days about the problems at SSA in executing its duties and that they were in trouble. At the end of the briefing, then then committee chairperson said they would be back but nothing further happened, there was no follow up.”

He found that the MPs failed to hold former ministers, including Mahlobo and Siyabonga Cwele, accountable.

“By failing to carry oversight role, Parliament and heed the calls by the country’s intelligence chiefs, Parliament has, at least to some extend, contributed to state capture.

“Because of its failure to do its job, the acts of corruption and state capture were allowed to spread and deepen. It should have stepped in to ensure the continuation of the investigation against the Guptas.”