When the most recent one hit the area – 71 years later – 'it struck a memory … when these things happen, it revives things that happened in the past', recalls Valentin Volker. 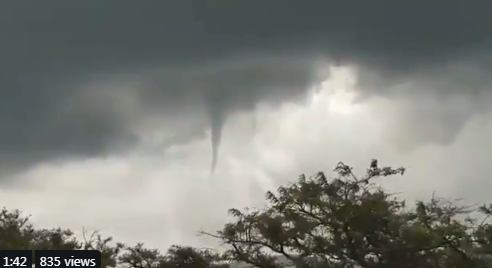 When a tornado struck in New Hanover, KwaZulu-Natal, on Tuesday and wreaked havoc on the small town, it brought back memories for 87-year-old Valentin Volker of similar scenes more than 70 years ago.

Then a 16-year-old pupil in Wartburg, Volker told News24 it was an afternoon in April when they noticed the tornado forming in New Hanover, which is north of Pietermaritzburg.

“What I remember is that a classmate of mine’s home was completely destroyed by the tornado,” he said.

“Then, surrounding communities banded together to help build a new home for the family,” Volker recalled.

When the most recent one hit the area – 71 years later – “it struck a memory … when these things happen, it revives things that happened in the past”.

“It’s something that doesn’t happen regularly in the country,” Volker said.

The extent of the damage caused by the tornado is yet to be determined, but the provincial government has said it could run into the millions.

On Tuesday, the Department of Cooperative Governance and Traditional Affairs activated councillors and volunteers to assist affected communities.

A statement issued by municipality spokesperson Mandla Nsele on Wednesday warned: “Severe thunderstorms accompanied by heavy downpours are expected over most parts of KwaZulu-Natal from Thursday into Friday afternoon.

“Improvement is expected from Friday evening, however, there will still be some rain in places over KwaZulu-Natal.”

Thuleyliwe Ndlovu, a mother of three, lost her 40-year-old daughter Sphe Ndlovu. She was distraught on Wednesday as rescue teams and officials arrived in the ravaged community.

Ndlovu said there had been heavy winds and rain, which forced them to take shelter.

“We ran into the house and closed the door. After we closed the door, I went to the bedroom to look for a jersey. While I was looking for the jersey, I heard the roof tiles making a huge noise. When I looked up, there were no tiles on the roof.”

She said a concrete block had fallen on top of her daughter.

“I couldn’t move the blocks because they were heavy. I tried and tried until the neighbours came to help me.”