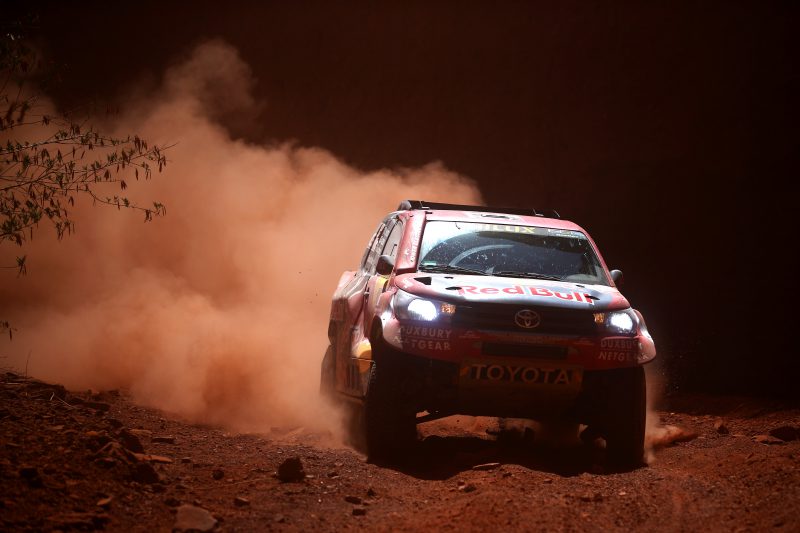 Giniel de Villiers wasn't flying like this all the time during the fourth stage of the Dakar. Photo: Dan Istitene/Getty Images.

De Villiers, lying fourth at the start of the stage, lost time searching for an early waypoint and was later forced to stop on the 364km timed section between Tucuman and San Salvador with fuel pressure problems.

The 44-year-old South African, who won the race in 2009, dropped out the top 10 in the overall rankings, with Frenchman Sebastien Loeb (Peugeot) retaining the overall lead.

Al-Attiyah, who was in second place overnight, ended 31st on the stage and his race for a third title looked to be over.

Spaniard Nani Roma was also forced to stop, but he lost only a few minutes and was able to hold on to fifth position overall, carrying the flag for the Toyota outfit. South African co-driver Rob Howie and Zimbabwean Conrad Rautenbach completed the stage in 25th place.

In the bike division, David Thomas continued to lead the SA charge on his Husqvarna, with his best performance of the race thus far.

Thomas was 26th on stage three, while compatriots Walter Terblanche and Joey Evans completed the leg outside the top 100.

Spaniard Joan Barreda (Honda) took the overall lead in the bike category with nine stages remaining in the gruelling contest.

Co-driver Sean Berriman, the lone SA representative in the truck division, was 27th on the stage with MAN teammates Mathias Behringer and Stefan Henken of Germany.