Hashim Amla: It was all about the runs, not the occasion

The Proteas' stalwart says the century in his 100th Test was all down to his desire to score runs again and not about his milestone. 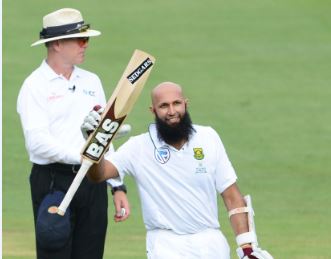 The poor Sri Lankans got a taste of that yesterday in the third Test at the Wanderers as they fell prey to South Africa’s bearded talisman’s steely desire to constantly just focus on cricket.

On the day he became the eighth South African to play in his 100th Test, Amla will fittingly be recorded as the eight batsman ever to score a hundred in that Test.

And the best thing about it is, his motives were are pure as ever.

Amla didn’t try to score this hundred to coincide with the occasion.

“Don’t get me wrong, I’m very grateful to have reached 100 Tests,” he said after ending the day unbeaten on 125 and guiding the Proteas to 338/3 at the close of play.

“But to be really honest, this Test match didn’t really feel any different to others because I only focused on one thing. I needed to score runs.

“What I’m trying to say is getting runs was more important that thinking of a century of Tests.”

Even though Amla is known as the calmest, classiest guy in any room he walks into, don’t underestimate how much his indifferent form weighed on his mind.

Before his innings, he hadn’t passed fifty in his last 10 outings to the crease.

As a result, the 33-year-old veteran kept his thoughts as uncluttered as he possibly could.

“I never tried to avoid engagements this week,” said Amla.

“I merely wanted a quiet build-up to this match. The frustration was creeping up a bit because I haven’t been scoring a lot of runs.

“I wanted my focus to be as pure as it could be. No razzmatazz or sideshows.”

That approach didn’t seem to initially pay dividends as Amla scratched his way to a painful 6 off 41 deliveries.

He was even afforded a life on 5 when Dhananjaya de Silva dropped him at gully.

But with the elegant JP Duminy on his side, Amla eventually flourished.

Duminy was outstanding in crafting a brilliant 155, at times dominating a third-wicket stand of 292.

The left-hander also seemed to take pressure off his struggling partner, though Amla didn’t see it that way.

“JP took pressure of the team actually. We lost two quick wickets and he didn’t let us become bogged won.

“I would’ve stayed in my bubble regardless of the way he played,” he said.

“When JP is at his best, he really is great to watch.”