Blitzboks gain quick revenge over England as they win in Sydney 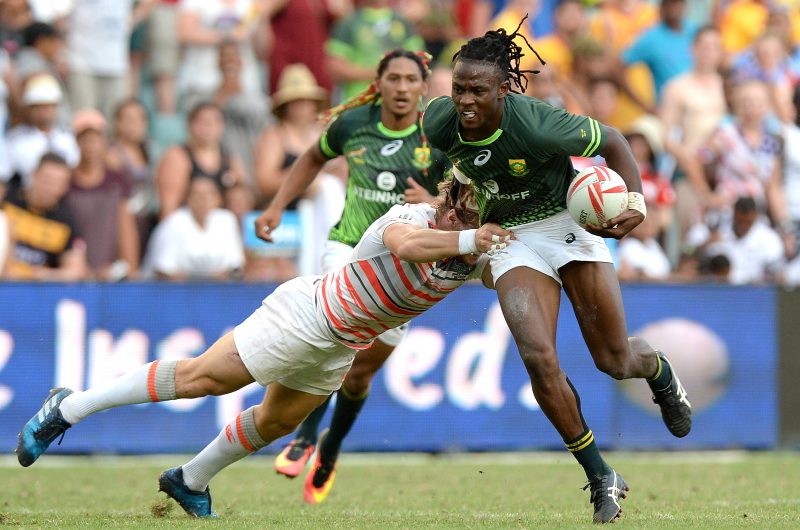 Seabelo Senatla signed off in the best way possible for the Blitzboks. Photo: Bradley Kanaris/Getty Images.

There’s nothing like a good kick up the backside to get someone going again.

The Blitzboks used Saturday’s relatively unexpected defeat to England in their final pool game of the Sydney Sevens positively to walk away winners of the Australian leg of the World Sevens series on Sunday.

Also read: Blitzboks go from invincible to vulnerable in Sydney

It’s their third title in four tournaments this season.

To make that victory even more sweet, they beat the English 29-14 in the final.

For Seabelo Senatla, it was the best to way to say “cheers” to his teammates as he now links up with the Stormers for the Super Rugby campaign.

The Blitzboks’ most valuable player once again shined in the showpiece match to walk away with the Man-of-the-Match award.

It was his weaving run in the first half, where he beat numerous defenders, that put South Africa on their way.

“It’s incredible. The guys are just magicians, hats off to them. I’m just the finisher of the moves,” he said.

“It’s bitter sweet, we play here with family so it is a pity to be leaving the family but it’s a new challenge I am excited for.”

Yet even if some fans feel jittery about him and Kwagga Smith leaving the roost, they’ll be encouraged by the contributions of others.

Captain Philip Snyman had South Africa on the board after 48 seconds, rounding off a sweeping move on the left touchline.

It was also a really good weekend for Justin Geduld, who is clearly relishing the playmaking role in Cecil Afrika’s absence.

He kicked superbly throughout and possess the type of versatility that will make him even more valuable in future.

The Blitzboks made sure they wouldn’t be caught off-guard by England again after a last-gasp try saw the Roses win 21-15 on day one.

Their marking was watertight and they bullied the English ball-carriers at the breakdown.

“The team stuck to the structure and well done to them,” said Snyman.

“It is extra special because it’s our first back-to-back win in Australasia. Hats off to all in the system.”

South Africa rocked up well on day two, firstly comfortably disposing of the USA 21-10 in their quarterfinal.

They built up further momentum with a fine 26-12 win over Australia, who were prickly and intent on making life difficult for the Blitzboks.