Local favourite Robyn de Groot hampered by her German partner's nasty crash after she tumbles down a hill. 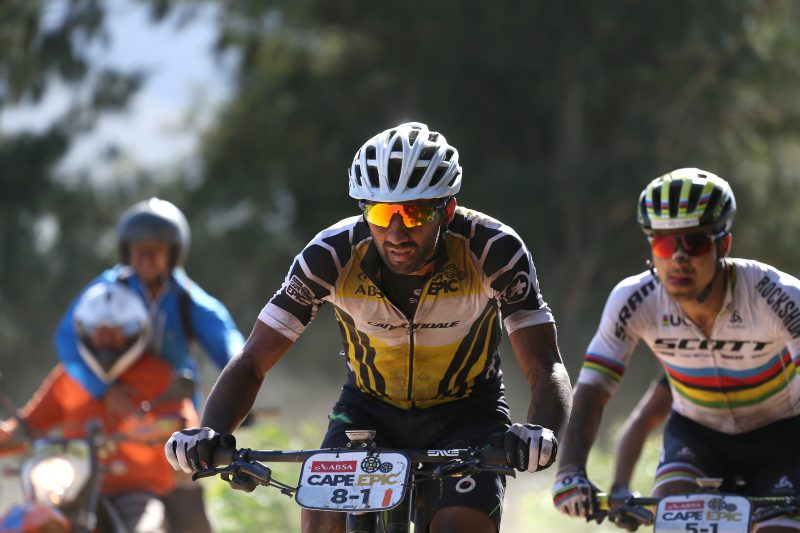 Manuel Fumic and his partner are the early frontrunners in the Epic. Photo: Carl Fourie/Gallo Images.

The Cannondale Factory Racing duo, who won the prologue on Sunday, added a victory on the first main stage, a 101km leg in Hermanus, stretching their overall advantage to two minutes, 41 seconds (2:41) over their nearest competitors.

“That was very good. We had a great run,” Fumic, a former World Championships cross country silver medallist, told the race website.

“Our plan was to get to the front and stay there. That worked very well for us today.”

Five-time winner Christoph Sauser of Switzerland and former Olympic gold medallist Jaroslav Kulhavy of the Czech Republic (Investec-Songo Specialized), who were lying fourth after the prologue, used their experience to charge through the field.

Despite Kulhavy falling and picking up a puncture, they took second place on the stage and moved into the runners-up spot in the general classification (GC).

De Groot, meanwhile, dropped back to second position in the women’s race after German partner Sabine Spitz (Ascendis Health) was involved in a nasty crash.

Spitz reportedly tumbled down a bank, completing the stage scratched, bruised and bloodied with a cut above her eye.

Jennie Stenerhag of Sweden and former marathon world champion Esther Suss of Switzerland (Meerendal CBC), who were 39 seconds behind at the start of the stage, finished around 10 minutes clear of De Groot and Spitz, who held on to second place overall.

After dropping out of last year’s race with a heart condition, while riding with De Groot, Stenerhag insisted they were not getting ahead of themselves with six days of racing remaining at the annual off-road contest.

“I was in the same position last year at this point so I am not going to be taking anything for granted,” Stenerhag said.

“I did not know how far ahead we were but we were in front so could take it a bit more carefully and not take any risks.”