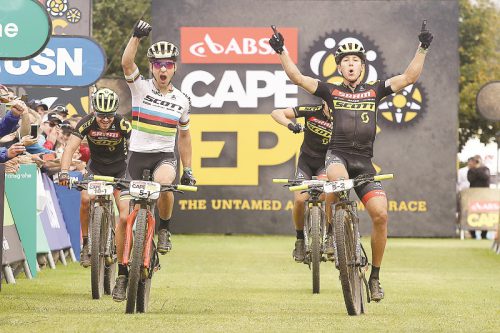 Another Swiss rider, five-time winner Christoph Sauser, and Czech partner Jaroslav Kulhavy (Investec-Songo Specialized) struggled at the start with Sauser feeling ill, but they held on to take third place.

They finished 17 seconds off the pace after producing a late surge. German Manuel Fumic and Brazilian teammate Henrique Avancini (Cannondale Factory Racing), who had led from day one after winning the prologue, were forced to relinquish their long-time advantage after picking up two punctures.

“On the first big climb of the day I noticed that Christoph (Sauser) was struggling and that’s when we decided to go for it.”

Schurter and Stirnemann moved into the overall lead for the first time in the race, and they were 50 seconds ahead of Sauser and Kulhavy with two stages remaining.

In the women’s race, South African rider Robyn de Groot and Ascendis Health teammate Sabine Spitz of Germany won the stage, just ahead of overall leaders Esther Suss of Switzerland and Jennie Stenerhag of Sweden (Meerendal CBC), though they remained 12 minutes behind in second place in the general classification.

“We had no choice but to do our best to put them under pressure,” de Groot said.

“We have time to make up and we did our best today. “It was a really hard stage from the start. It was pretty intense.

“We hoped we would get away today and we did get away a couple of times, but not enough to stay away.”

The 103km penultimate leg of the gruelling eight-day contest will be held on Saturday.