Cristiano Ronaldo’s bust: ‘Not even Jesus could please everyone’

The sculptor of the Real Madrid superstar's dodgy sculpture defends his work after social media had a field day mocking it. 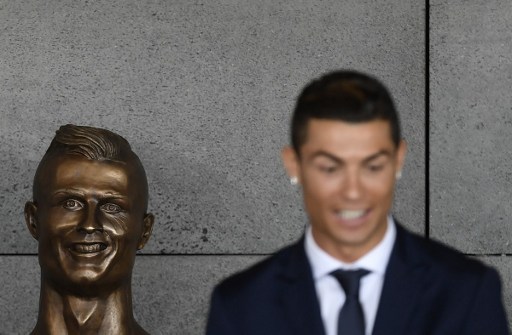 It's like looking at identical twins... Cristiano Ronaldo at the unveiling of his bust at Madeira airport. Photo: Francisco Leong/ AFP.

“It is impossible to please the Greeks and Trojans. Neither did Jesus please everyone.”

Emanuel Santos, a sculptor, on Thursday used that argument to defend the dodgy bust of Cristiano Ronaldo he created for Madeira’s airport, according to various reports.

The bronze sculpture was unveiled on Wednesday in front of the terminal entrance in Funchal, the capital of the Portuguese island, but was widely ridiculed on social media.

It clearly doesn’t look much like the Real Madrid superstar.

I don't what you're all talking about, that #RonaldoBust looks fine pic.twitter.com/QefUPwYkpf

Some of the all-time great Cristiano Ronaldo moments pic.twitter.com/57Tx9VhbUm

But Santos, a former employee at the airport who had offered to do the sculpture, insists he had the blessing of all parties involved.

“Cristiano saw the photos that his brother sent him. I was with the brother at Cristiano’s museum in Madeira and from the messages he sent, I could tell that he liked what he saw,” he said.

“He only asked for some wrinkles that give him a certain expression in his face when he’s about to laugh to be changed. He said it made him look older and asked for it to be thinned out a bit to make it smoother and more jovial. But they gave it the go-ahead; they liked what they saw.”

Ronaldo, who was at the unveiling, struggled to hide his laughter.

Santos though was adamant that the criticism for his work, which took three weeks, is unfair.

“This is a matter of taste, so it is not as simple as it seems. What matters is the impact that this work generated. There is always the possibility of making a difference, I was prepared for all this. I used as a base some photos of Cristiano Ronaldo that I found on the internet, nothing specific. I put the photos next to me and started working on the bust,” he said.