While he admits religion has a big influence on his life, Harmse also insists he’s no saint. 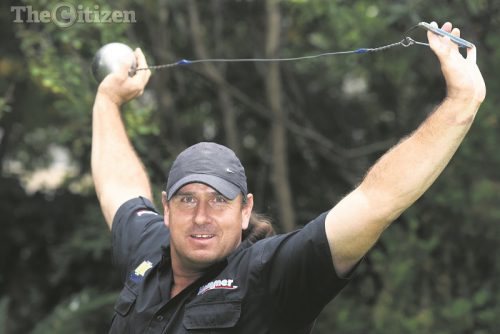 A giant of South African athletics, Chris Harmse, will be remembered for a number of reasons, including his unique longevity in a power-based discipline and his firm religious beliefs, but he doesn’t want to be defined by anything specific.

His career medal haul may not reflect his tremendous potential at international level but Harmse is the proverbial father of South African athletics. He believes his well-rounded approach has not only taken him to the top of the sport, but helped entrench him at the summit for more than two decades.

While relay sprinters were warming down next to the track and spectators packed their bags in the stands, a yell of joy echoed through the dusk in Potchefstroom last week, muffled by the sound of Chariots of Fire playing for one of the final medal ceremonies at the SA Senior Championships.

After securing a narrow victory, Harmse was expressing more relief than delight, he admits a few days later. Sitting comfortably in the lush garden of his physiotherapist’s home in Vanderbijlpark, his ponytail tucked neatly behind his trademark cap, the 43-year-old athlete reflects on his latest achievement.

“It was the first time I was so emotional at a meeting because I knew what my odds were,” he says.

By lifting the SA hammer throw crown for the 22nd year in a row, he earned the enviable record for the most successive national titles yet held in any discipline in any country.

He had entered the competition with a niggling injury, but Harmse managed to pull through at Puk McArthur Stadium, launching the hammer just 23 centimetres clear of his nearest opponent.

“I had contemplated in the morning just staying at home and when I pulled it off, it was like the great escape. I couldn’t believe it.”

Despite racking up a long list of impressive achievements throughout his lengthy career, Harmse has made headlines for other reasons, too, most notably his decision not to compete on Sundays due to his Christian beliefs.

While he has earned Commonwealth Games, African Games and African Championships gold medals, this commitment to his faith has twice seen him lose out on the opportunity to compete at the Olympic Games.

He admits religion has a big influence on his life, but Harmse also insists he’s no saint.

“I do a lot of things on that day (Sundays) and I’ll go to certain places. But I do have restrictions to keep that discipline and to remind me of the blessings I have received,” he says.

“I’m a naughty guy, so I get irritated if people try to make it more than it is. I’m the same as anybody else and I respect everybody’s views and outlooks on life.”

Although he felt he could have beaten anyone in the world on his day at his peak, Harmse says he would have it no other way.

His faith may have denied him a place at the 2000 Sydney and 2004 Athens Games, but Harmse credits the same beliefs for his multiple successes, including the African hammer throw record of 80.63m, which he has held since April 2005.

“As a man of faith, I don’t have any regrets. I think a lot of positive things came from it,” says Harmse, who has been trained by Basie Koen near his home in Sasolburg throughout his
career.

“If you gave me the chance today, I would not change anything.”

Although the world championships in London this season is not on his radar, Harmse hopes to qualify for the Commonwealth Games at Australia’s Gold Coast next year, aiming for a fourth medal at the quadrennial showpiece and he remains eager to challenge for masters’ age group world records.

Often lifting weights at home well into the night, Harmse is forced to juggle various responsibilities outside his training programme.

Assisting Koen as a mentor at his hammer throw academy and running a full-time business in Vanderbijlpark, which imports hydraulics and pneumatics, Harmse knows he can’t keep up the workload forever.

He nonetheless insists he will continue to participate as long as he remains competitive.