SA athletes pushing each other to new heights – Simbine

'Everyone is excited about athletics in South Africa now, and we all want medals.' 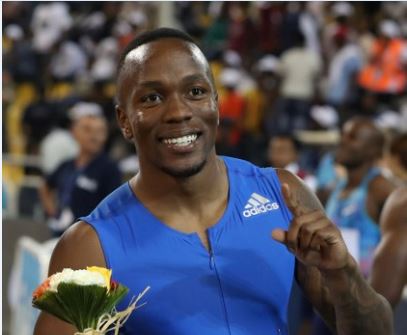 Sprint sensation Akani Simbine says he has been buoyed by the success of his compatriots, as South Africa’s top speedsters motivate one another to continue their charge in leading an athletics revolution across the country.

“We’ve always tried to tell the world that South Africa is a sprint nation, and now it’s not just words. We’re actually putting it into action,” Simbine said on Monday after being revealed as a Mercedes-Benz ambassador.

“We’re growing into a sprinting nation, which is what we need, and hopefully people will show more support for the sport and back the athletes.”

With the likes of 400m world record holder Wayde van Niekerk, World Championships 200m bronze medallist Anaso Jobodwana and Olympic 100m finalist Simbine lighting up the tracks around the world in the last few years, Simbine said they were pushing each other to raise the level of the sport back home.

Even the likes of middle-distance star Caster Semenya, who was becoming a formidable athlete over the 400m distance, and rising junior stars Gift Leotlela and Clarence Munyai, had formed key components in the recent explosion of talent.

“We keep inspiring and motivating each other to grow the sport,” Simbine said.

“South Africa definitely has the talent to take on the top counties in the world.

“We’ve seen Wayde, Caster, Anaso, and now we’re starting to believe that we can compete against the world and be the best.”

Having played an instrumental role in drawing crowds to the SA Senior Championships in Potchefstroom last month with the #FillUpPotch social media campaign, Simbine also credited coaches and other athletes in various disciplines for the rising popularity of the sport.

Aside from the sprinters, the likes of javelin thrower Sunette Viljoen and long jumper Luvo Manyonga had assisted in attracting the interest of the general public.

Manyonga in particular, according to Simbine, proved the nation had an immense depth of talent, with the lanky athlete establishing his place as the best in the world in his specialist discipline in recent months, after returning to the sport from a lengthy hiatus last year.

By attracting more young athletes to track and field, and increasing the talent pool, Simbine felt the sport would continue to progress.

“Everyone is excited about athletics in South Africa now, and we all want medals.

“If Luvo can go away for a few years, come back and do what he’s doing, it makes me wonder how many other athletes are just as talented and also have the potential to dominate the way he is doing.”

Simbine, meanwhile, confirmed he would leave for Europe this week, after taking the first Diamond League victory of his career in the 100m sprint in Doha earlier this month.

He would set up camp in Gemona, Italy with fellow sprint star and good friend Van Niekerk, and both athletes were set to compete next at the Adidas Boost Games in Boston on June 4.

'Angry' Simbine targets new season to put pain of Tokyo behind him
1 week ago
1 week ago
PREMIUM!

'Angry' Simbine targets new season to put pain of Tokyo behind him
1 week ago
1 week ago
PREMIUM!