South Africa's challenge at the event falters but Nolene Conrad does well to finish second in the women's race. 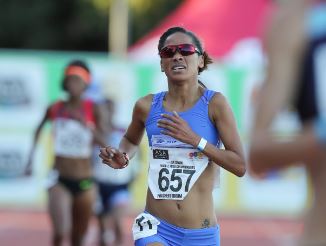 Kenyan distance runner Morris Gachaga laid down the hammer in the closing stages to break the eight-year-old 12km world best in Cape Town on Sunday.

Pushing the pace in the second half at the Cape Town 12 OneRun race, Gachaga crossed the line in 33:27 to chop four seconds off the global mark over the rarely run distance, which had been set by countryman Sammy Kitwara in San Francisco in May 2009.

His performance could not be considered as a world record, however, as the race was held over an unofficial distance on a point-to-point course.

“It was a great race with good weather and very good runners,” Kitwara said.

“I was trying to push because I was told it was a good course and I could break the world best.

“I’ll come back next year to defend my title.”

Namakoe Nkhasi of Lesotho, who was dropped in the latter stages after delivering a gutsy performance, took second place in 33:43, and Elroy Gelant was the first SA athlete home in 33:54, taking third spot for the second year in a row.

“I felt strong right through the race, so I’m glad with my time and my run today,” Gelant said.

“It was a great race with good competition.”

British athlete Tish Jones, who won the Cape Town Marathon last year, annihilated the women’s field by stunning the local contingent with a gun-to-tape victory in 39:50.

Nolene Conrad carried the SA flag in the absence of title holder Irvette van Zyl, who fell ill ahead of the event, and in-form Kesa Molotsane, who recently underwent a mild operation.